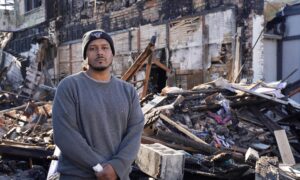 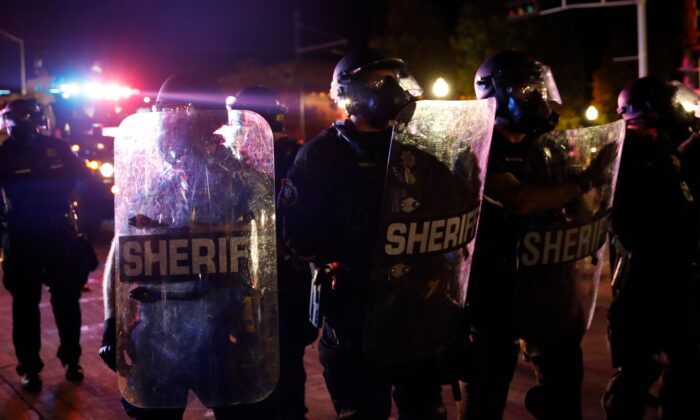 Sheriff and police in riot gear face off with protestors outside the County Courthouse during demonstrations against the shooting of Jacob Blake in Kenosha, Wis. on Aug. 25, 2020. (Kamil Krzaczynski/AFP via Getty Images)
Crime and Incidents

A Wisconsin man accused of assaulting a police officer during the Kenosha riots following the police-involved shooting of Jacob Blake in August last year has been indicted on two federal counts.

Ashton Howard, 27, of Kenosha has been charged with obstructing a law enforcement officer during a civil disorder and unlawful transport of firearms as a convicted felon, authorities announced on Wednesday.

Howard is accused of throwing a heavy object at a police officer who was at the time attempting to move a damaged police vehicle. The officer was struck in the head and knocked unconscious on Aug. 23, 2020, according to court documents.

Howard is also accused of possessing ammunition, despite a prior felony conviction. According to court records, Howard was convicted in a federal court in Louisiana for possessing stolen firearms. He was sentenced to two years in prison in 2016.

“There must be accountability for anyone who attacks a law enforcement officer during a civil disorder,” U.S. Attorney Matthew Krueger said in a statement. “I commend the painstaking investigative efforts of the FBI and Kenosha Police Department to bring this case.”

FBI Special Agent in Charge Robert Hughes said the federal law enforcement agency will continue to work with its partners to “aggressively investigate and hold those responsible who obstruct law enforcement during civil disorder.”

If convicted of the two charges, Howard faces a maximum prison sentence of 15 years. The case will be prosecuted by Assistant U.S. Attorney Benjamin Proctor.

Kenosha Police Chief Daniel Miskinis said the incident was “not a case of legal protest” but a “felonious assault on a police officer.”

“This type of conduct cannot and will not be accepted,” Miskinis said.

The estimate was based on what it would cost to replace damaged items, including smashed lights and garbage trucks set ablaze. It did not include personnel costs.

The destruction erupted after Blake was shot in the back on Aug. 23, 2020, while resisting arrest in a confrontation with police who were responding to a domestic incident. He suffered serious injuries from the shooting. According to police scanner audio, a woman called 911 to report Blake at her home when he wasn’t supposed to be, and that he had taken her keys and wouldn’t give them back. A dispatcher said that Blake had an arrest warrant for sexual assault issued in July.

Blake’s shooting sparked a wave of protests, some turning violent, with rioters torching half a dozen buildings, including a number of small businesses.

On the third night of unrest, there was a shooting that resulted in one injury and two deaths. Authorities imposed a curfew in a bid to quell the unrest and minimize the threat to people and property.

Authorities initially refused offers of federal assistance to help cope with the rioting. But after a shooting involving an Illinois teenager, the National Guard was sent in.

President Joe Biden condemned the violence at the time, saying that “burning down communities is not protest—it’s needless violence. Violence that endangers lives, violence that guts businesses, and shutters businesses that serve the community. That’s wrong.”

Of Blake’s death, Biden expressed his outrage. It “makes me sick,” he said. “Once again, a black man, Jacob Blake, has been shot by the police in broad daylight with the whole world watching.”

Prosecutors said earlier this month that no police officer will face charges over Blake’s shooting.