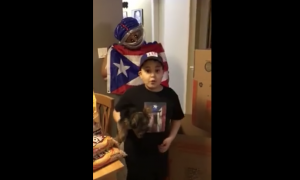 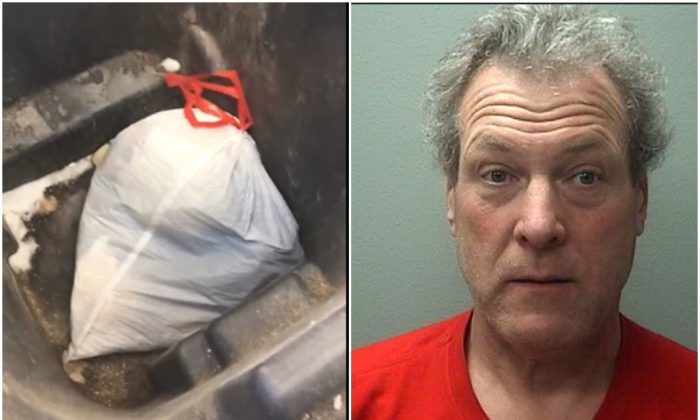 Robert Wild and the bag of puppies found by police, on Feb. 28, 2019. (Marshfield Police Department)
US News

A Wisconsin man has been arrested after allegedly dumping eight newborn puppies in a garbage bag.

Marshfield police were dispatched to investigate what they understood to be the sound of kittens mewing from inside a garbage can.

“Upon arrival, it was learned that the sound was coming from eight newborn puppies, which had been discarded in a garbage bag and trash can,” said a statement by Marshfield Police on March 12.

They tracked down Robert M. Wild, 56, who admitted to dumping the puppies, said the police.

“Misdemeanor charges were requested through the Wood County DA’s office on Robert M. Wild for mistreatment of animals and abandonment of animals.”

According to the local shelter where the puppies were taken, they are safe and doing well.

“At this time, adoption applications are NOT being accepted (we need to focus on making sure these guys grow up big and strong first!) but donations ARE welcome!” wrote the Marshfield Area Pet Shelter on it website.

*** PUPPY UPDATE *** It was recently released to the media that there were puppies found in a Marshfield dumpster. The…

Two weeks ago six puppies were found in a sack in Massachusetts—floating down a river.

The puppies, which are expected to survive, were rescued from the Blackstone River by kayakers who heard the dogs’ whimpers from inside a potato sack.

“I believe as a police chief they had guardian angels looking over them, these kayakers,” Uxbridge Police Department Chief Jeffrey Lourie said, according to CBS. “It was only a matter of time before they were all submerged and perished.”

The puppies were believed to be seven days old.

Uxbridge puppies are healthy after being dumped in Blackstone River. Adoptions in 8-9 weeks. pic.twitter.com/Qhm1TCtzLO

The department, on Facebook, said that they’re looking for the “low life” suspect behind it.

“Obviously this is a heinous act, unconscionable,” Lourie said. “We definitely want to be able to charge [the suspect] with six counts of cruelty to animals.”

Jack Phillips contributed to his report.