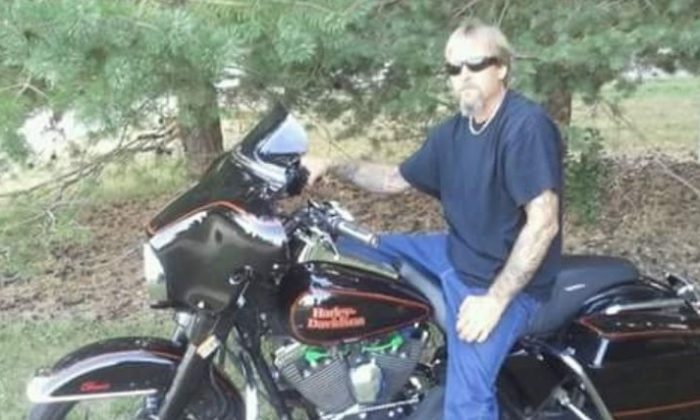 A Wisconsin man, Greg Manteufel, had several of his limbs amputated after contracting a rare blood infection that was likely transmitted to him via his dog, reports on July 30 said. (GoFundMe)
US News

A Wisconsin man had several of his limbs amputated after contracting a rare blood infection that was likely transmitted to him via his dog. Greg Manteufel, of West Bend, Wisconsin, was sent to the emergency room for what he thought was the flu, Fox6 reported on July 30.

“It hit him with a vengeance,” Dawn Manteufel, his wife, told the station. “Just bruising all over him. Looked like somebody beat him up with a baseball bat.”

In late June, doctors found that blood tests revealed an infection caused by the bacteria capnocytophaga. “It took a week, and they were taking his legs,” said Dawn Manteufel.

“This type of bacteria comes from the saliva of dogs. This infection in his blood triggered a very severe response on his body,” said Dr. Silvia Munoz-Price, who is an infectious disease specialist with the Medical College of Wisconsin. “Sometimes it decreases so much that the arms and legs just die,” she added.

The Fox affiliate report stated that doctors were then forced to amputate his limbs.

“This bacteria caused the sepsis in Greg’s body that has completely changed not only Greg’s life but his entire family’s as well. Within days of being admitted to the hospital while still fighting for his life, Greg first lost both feet, after a second surgery to remove more damage on legs, they amputated thru both kneecaps. Surgery is scheduled to remove a portion of both hands as the damage from the sepsis is too extensive,” according to a GoFundMe page set up for his family.

“We can’t wrap our heads around it that all of the sudden, he’s 48 years old and been around dogs all of his life… and this happens,” said Dawn Manteufel.

According to the U.S. Centers for Disease Control and Prevention, several types of Capnocytophaga bacteria “live in the mouths of dogs and cats.”

“Rarely, Capnocytophaga species can spread to humans through bites, scratches, or close contact from a dog or cat and cause illness. Most people who have contact with a dog or cat do not become sick. People with a weakened immune systems who have difficulty fighting off infections (for example, people with cancer or those taking certain medications such as steroids) are at greater risk of becoming ill,” the agency says.