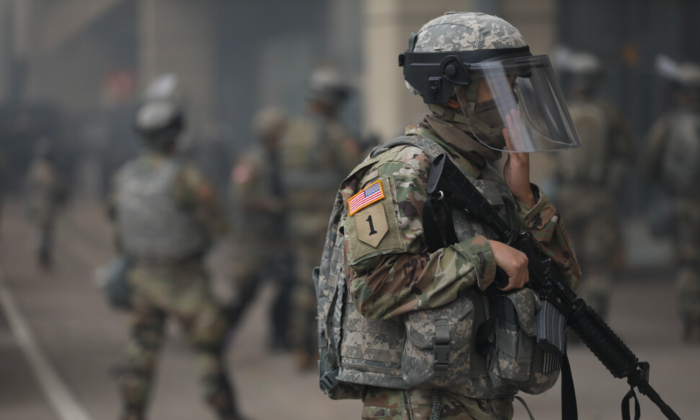 A National Guardsman stands near the Lake St. Midtown metro station after a night of protests and violence following the death of George Floyd, in Minneapolis, Minn., on May 29, 2020. (Charlotte Cuthbertson/The Epoch Times)
2020 Election

Wisconsin Gov. Tony Evers announced he may activate the Wisconsin National Guard to make up for poll worker shortages in several areas across the state.

“The Guard will play a role as much as they are needed,” Evers, a Democrat, said of the forthcoming election on Nov. 3, reported The Associated Press. They will be deployed to deal with shortfalls in staffing at various poll locations.

“The National Guard will be there to make sure we have enough people working at the polls,” he also said, according to the Milwaukee Journal-Sentinel.

He noted that the largest shortfalls are in Green Bay, where approximately 30 workers are needed, as well as in Menomonie, which had about 15 positions that needed to be filled, AP reported.

Wisconsin, considered a battleground state, was won by President Donald Trump in 2016’s election by a slim margin.

“Clerks are doing a good job of recruiting and Wisconsin citizens are stepping up in response to either calls to action or problems that occurred in April,” Wisconsin Elections Commission spokesman Reid Magney told the news agency.

Evers has been no stranger to activating the National Guard this year. He activated the Guard in April and August during elections, and he also deployed it to deal with unrest during riots in Kenosha in August.

Meagan Wolfe, the director of the state Elections Commission, told the Journal-Sentinel that 51 Wisconsin communities are in need of polling staff, adding that it is a small but significant problem.

“I think we’re in a much better spot than we have ever been this year,” Wolfe told reporters.

Those 51 communities need about 180 workers, Wolfe said, adding that Milwaukee, the state’s largest city, has enough poll workers for the November election.

Election officials, advocacy groups, and others in Wisconsin and across the country have been recruiting poll workers more aggressively this year because older volunteers have been backing out due to concerns over the coronavirus.

Younger people, such as 26-year-old Karli Tatum of Milwaukee, have been a target because they are less vulnerable to the coronavirus.

A record-high number of Wisconsin voters are also casting ballots absentee, which election officials say should cut down on lines on Election Day as well. As of Thursday, more than 785,000 voters had returned absentee ballots. That is more than 26 percent of the total number who voted in the 2016 presidential election.