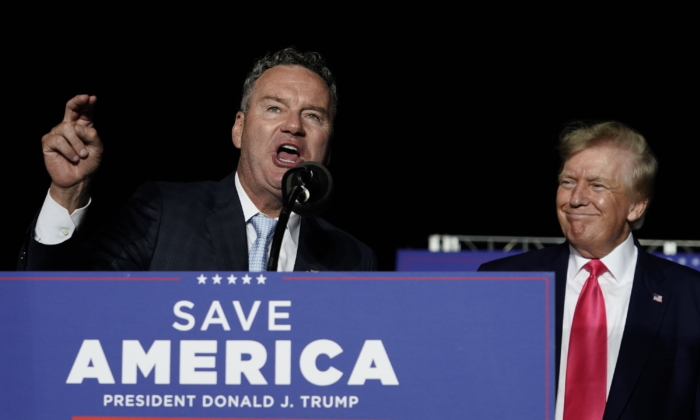 Voters head to the polls on Aug. 9 in Wisconsin, and for the third time, a candidate endorsed by former President Donald Trump faces a candidate given the stamp of approval by his former vice president, Mike Pence.

The race represents the most recent battle between Trump and Pence, both of whom are potential presidential candidates in 2024.

Michels, who owns a construction company, has loaned his campaign around $12 million. Kleefisch is backed by Pence along with former Wisconsin Republican Gov. Scott Walker and Sen. Ted Cruz (R-Texas).

A former TV news anchor, Kleefisch served for two terms as lieutenant governor under Walker, who has enthusiastically campaigned for her.

Kleefisch has raised more than $7.5 million. State Rep. Tim Ramthun has generated around $189,000.

Until Michels entered the race and then secured Trump’s endorsement in June, Kleefisch owned a comfortable lead in the polls. Michels has poured millions of dollars of his own money into TV ads, portraying himself as a businessman and an outsider.

Michels and Kleefisch have cast doubt on President Joe Biden’s victory in Wisconsin in 2020.

Kleefisch has drawn criticism from Trump for being an establishment politician, but she has said the 2020 election was “rigged.” She is also the lone Wisconsin GOP gubernatorial candidate who has dismissed the idea of overturning the outcome.

“It’s not constitutionally possible,” Kleefisch said at a GOP gubernatorial debate. “There is no path to decertifying an election that has already happened.”

Wisconsin political strategists have said that the primary illustrates a divide between Republicans in the suburbs, where Kleefisch draws significant support, and the rural areas, which are loyal to Trump.

The winner of the Aug. 9 primary will face Democratic Gov. Tony Evers, who defeated Walker by a percentage point in 2018 and has frequently battled Wisconsin’s conservative-leaning state legislature. He has vetoed more bills in a single session than any governor in the state’s history.

“Every candidate in the Republican primary is too extreme for our state, and would sign into law dangerous bills that would undermine our democracy,” Evers campaign spokesman Sam Roecker said in a statement. “Gov. Evers is focused on doing the right thing for our state and bringing people together to solve real problems.”

Biden won Wisconsin by around 21,000 votes in 2020. Trump has repeatedly called for state legislators to invalidate the results. Wisconsin’s Supreme Court ruled that dropboxes for absentee ballots are no longer allowed.

“So do you know what that means?” Trump said at a rally for Michels on Aug. 5 in Waukesha, Wisconsin. “That means they were obviously illegal in the 2020 election. Hundreds and hundreds of thousands of votes.”

“I am going to get election integrity back in Wisconsin,” Michels said at the rally. “We are going to stop the ‘Zuckerbucks,’ out-of-state billionaires coming into our state and taking control of our election process. It won’t happen anymore.”

Kleefisch has repeatedly said that decertifying Wisconsin’s 2020 election results is not legal under state or federal law.

At the rally, Trump said that Kleefisch is “a career politician and a political insider” and described her as the “handpicked candidate of the failed establishment.”

Days before the primary, an Emerson College poll showed that Kleefisch had a two-point lead—36 percent to 34 percent—over Michels, which is within the margin of error. Ramthun was third with 8 percent while 14 percent reported that they are undecided.

When undecided voters were polled about who they were leaning toward, Kleefisch gained 41 percent compared to 39 percent for Michels.

Trump and Pence have also split on their gubernatorial candidate endorsement results.

On Aug. 8, Michels attended the Wisconsin State Fair in the afternoon and hosted a rally in the evening.

When Pence endorsed Kleefisch, he said, “Rebecca has a proven conservative track record and will draw on her experience to give parents more control of their children’s education, grow the economy and get Wisconsin back to work, fight for traditional conservative values, and make Wisconsin streets safer. Conservatives across the Badger State can fight back against the radical left in Wisconsin and join me in supporting Rebecca Kleefisch for governor.”

Trump believes that Evers will win another term as governor if Kleefisch prevails on Aug. 9.

“Rebecca Kleefisch does not have what it takes to beat Tony Evers,” Trump said. “He’s going to win if he runs against Rebecca.”

Not long after receiving Pence’s backing, Kleefisch told supporters at a campaign stop, “I am the one who is tested and proven and ready to go. I am the one who has won statewide four times.”

Political analysts like The Cook Political Report, Sabato’s Crystal Ball, and Inside Elections rate the general election as a toss-up.

Evers told reporters last month that he welcomes the challenge and highlighted the state’s 2.8 percent unemployment rate and a cut in income taxes among other accomplishments during his term.