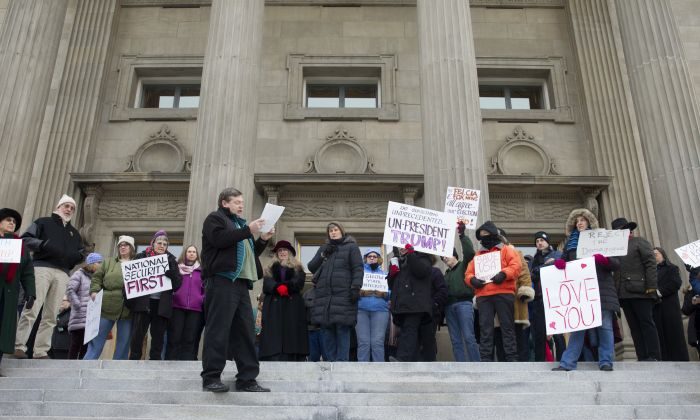 A protester reads aloud Texas elector Christopher Suprun's letter about why he will not vote for Donald Trump at the State capitol building in Boise, Idaho, Monday, Dec. 19, 2016. Idaho's four Republican electors are scheduled to meet in Boise on Monday to cast their ballots for the president of the United States. (AP Photo/Otto Kitsinger)
Politics

The Latest on the Electoral College vote in Wisconsin (all times local):

Protesters marched outside the Capitol a couple hours before the vote Monday and several of them sat in the hearing room for the actual casting of the ballots. All 10 electors stuck by Trump, despite the national effort to try and sway them to choose someone else.

One woman yelled, “This is my America, you sold us out!” after the vote as she was taken from the room by police. Another person yelled, “We’re all going to go to war and die thanks to you!”

One man sang the refrain of “Silent Night.” Several broke into chants of “Shame!”

The Republican electors cast their ballots at a meeting Monday in the state Capitol.

Trump won 306 electoral votes, 36 more than the 270 he needed to become president. It would take 37 electors nationwide who are bound to Trump breaking ranks to prevent him from becoming president next month.

Efforts were underway across the country to try and sway electors not to vote for Trump.