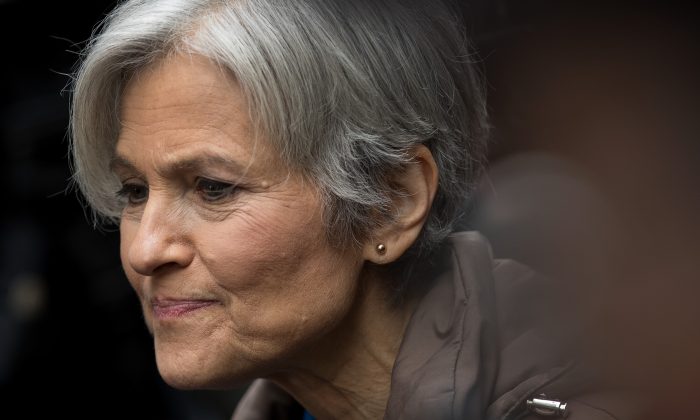 Green Party presidential candidate Jill Stein speaks at a news conference on Fifth Avenue across the street from Trump Tower in New York City on Dec. 5, 2016. Stein, who has launched recount efforts in Michigan and Wisconsin, spoke about demanding a statewide recount on constitutional grounds in Pennsylvania. (Drew Angerer/Getty Images)
US

The latest results were reported on Dec. 7 by the Wisconsin Elections Commission, reported The Associated Press. The agency said that the counties remain on track to finish their work by the state-imposed deadline of 8 p.m. on Tuesday, Dec. 13. In Wisconsin, 34 of 72 counties have completed their work and the others are all nearing completion, AP reported. More than 2.1 million votes out of the nearly 3 million cast have been recounted.

According to the Journal-Sentinel, ballots cast in Milwaukee, the state’s most populous city, have been counted. Most voters in counties around Milwaukee and the city itself voted for Clinton.

A few of Wisconsin’s largest counties, such as Dane and Brown, are still counting by hand or machine, Milwaukee Election Commission executive director Neil Albrecht told the paper.

But according to AP’s latest figures, Clinton has gained 492 votes so far in the recount, and Trump has gained 410 votes after the recount. Trump won Wisconsin by more than 22,000 votes.

Green Party candidate Jill Stein is pushing for recounts in Wisconsin, Michigan, and Pennsylvania—three states Trump won by a relatively narrow margin. Stein claims that recounts are needed to ensure the integrity of the states’ election systems.

A federal judge in Michigan on Wednesday night halted the Michigan recount, saying he had to follow an order handed down by a Michigan appeals court, which found that Stein and the Green Party couldn’t call for a recount. Stein, who got 1 percent of the vote, presented no evidence of fraud, the Michigan judge noted, reported AP.

US Judge to Hear Arguments in Pennsylvania Election Recount

In Pennsylvania, a judge ordered a hearing on the possibility of a statewide recount, with Trump’s campaign lodging complaints in saying that such a late start would make it impossible to complete the recount by the Dec. 13 federal deadline, the Washington Post reported.

“All recounts are important in that it gives that candidate’s and regular voters the opportunity to request that we recount any contest they feel should be recounted,” Nevada’s Clark County Registrar Joe Gloria said, KVVU-TV reported. Ballots cast in 93 precincts will be recounted, with 84 of those precincts located in Clark County.