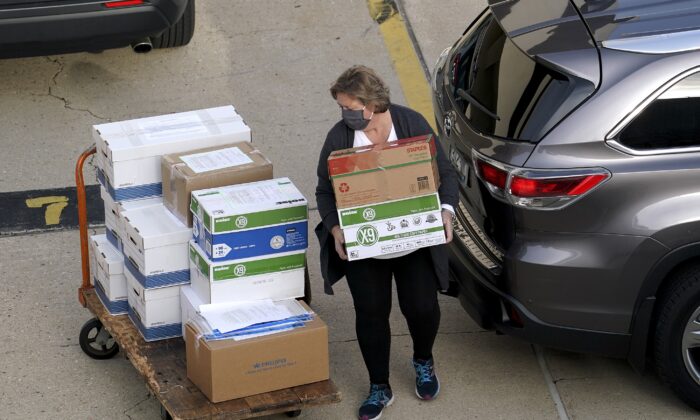 Election officials from around Dane County bring ballots into the Monona Terrace in Madison, Wis., for a recount, on Nov. 19, 2020. (Steve Apps/Wisconsin State Journal via AP)
Wisconsin

Election officials in Wisconsin asked the state’s Supreme Court on Friday not to invalidate the Nov. 3 election.

The Wisconsin Elections Commission said plaintiffs who filed an emergency petition earlier this week made arguments that rest “on the flimsiest of legal and factual bases.”

“They begin with a smorgasbord of meritless legal arguments about how the election was conducted, including an already-litigated dispute with certain cities about accepting grant funds and quarrels with advice from the Elections Commission on which local clerks and voters relied when casting and counting ballots,” the commission said in a court filing.

“Even if Petitioners had identified some scattered legal errors—and they have not—the only factual basis they offer to show the extent of those issues is a so-called ‘expert report’ riddled with obvious defects. This Court cannot invalidate an entire statewide election based on these borderline frivolous claims.”

The Wisconsin Voters Alliance and other plaintiffs asked the Wisconsin Supreme Court to enjoin certification of the election, transferring the choice of electors to the state Legislature, which is controlled by Republicans.

The Thomas More Society’s Amistad Project, which filed the petition, said it identified over 150,000 potentially fraudulent ballots, “more than enough to call into question the validity of the state’s reported election results.”

The Elections Commission said the case lacks merit and that the petitioners lack standing.

“Petitioners’ requested relief is more than extraordinary—it is unlawful. They do not identify a single source of state law that would allow this Court to ignore the statutorily designated method for choosing presidential electors—a statewide popular vote—and simply turn the choice over to the state legislature. That is because there is not a single statute in our state election code that provides for this kind of extraordinary relief,” the new filing states.

“Instead, they seem to assert that federal law allows this striking remedy. It does not. Overriding Wisconsin’s statutorily designated method for choosing presidential electors after an election has taken place is precluded by Article II of the U.S. Constitution and would violate the constitutional due process rights of the more than 3.2 million voters whom it would disenfranchise.”

In response, Phill Kline of the Amistad Project told The Epoch Times: “I would not expect those who created this management of this election, that radically sidestepped or ignored state law, would say anything else.”

The commission is an agency that includes members of both parties. It is in charge of administering and enforcing election laws.

Meagan Wolfe, who the commission appointed as the top state election official in 2018, said earlier this month that she has seen no evidence supporting claims of “systemic or widespread election issues.”

According to unofficial results, Democratic presidential nominee Joe Biden beat President Donald Trump in the state by about 20,000 votes. Trump won Wisconsin in 2016.

The commission ordered a recount of two counties based on a request from the Trump campaign. Dane County officials are still conducting the recount. Milwaukee County officials announced Friday they’d finished, ending with Biden in the lead by 132 more votes than beforehand.

Another lawsuit was filed on Nov. 27 in Wisconsin.

The suit, submitted to the Wisconsin Supreme Court, seeks to block the state from certifying the election results, arguing that all ballots cast via drop boxes are illegal and should be discarded, and if such ballots cannot be reliably identified for rejection, then the state legislature should nominate its own slate of presidential electors.