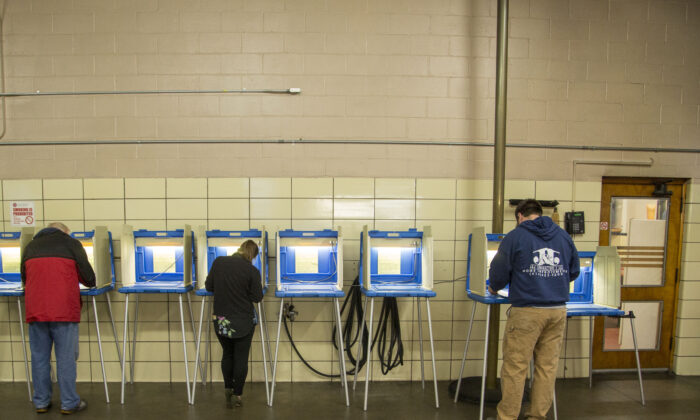 Voters cast their midterm ballots at the District 5 Ward 83 firehouse in Milwaukee, Wisconsin, on Nov. 6, 2018. (Darren Hauck/Getty Images)
US News

Wisconsin Court Temporarily Blocks Purge of Up to 209,000 Names From Voter Rolls

A Wisconsin appeals court ordered the state on Jan. 14 to temporarily halt the removal of more than 200,000 people from its voter registration rolls for failing to answer questions about their addresses.

The removal of as many as 209,000 names was put on hold a day after an Ozaukee County judge found three members of the Wisconsin Elections Commission in contempt of court for ignoring an order he gave in December 2019.

An appeals court judge also blocked the contempt finding in a separate order, putting on hold a decision that fined the three Democratic members $250 a day each until they voted to purge the names.

The appeals court on Jan. 14 ordered that the lower court’s order against the commissioners and a Dec. 13 order to purge the names from voter rolls be “stayed until further order of this court,” the court clerk wrote.

The rulings will ensure, temporarily, that thousands of names won’t be removed from the rolls until the appeals court reviews the dispute. Democrats have raised the alarm over the potential removal of so many registrations in a state set to be a battleground when President Donald Trump seeks reelection in November.

The order to remove hundreds of thousands of names was initially made last month, and came after the state Elections Commission sent notices in October last year to more than 230,000 people that were thought to have moved, requesting that they update their voter registrations or indicate that they hadn’t moved.

The letters were sent to the voters based on data from the Electronic Registration Information Center that suggested they had potentially changed addresses. If they didn’t respond, they were in danger of being removed from the rolls by 2021.

“We want voters to be prepared for 2020,” Meagan Wolfe, Wisconsin’s chief elections official, said at the time. “This mailing is designed to help people who may have moved within Wisconsin make sure they’re ready to vote next year. It will not keep anyone eligible from voting.”

“If you move, even to an apartment in the same building, you must update your voter record by re-registering,” Wolfe said.

The conservative Wisconsin Institute for Law & Liberty (WILL) brought a case by three voters, who said the state should remove the voters from the rolls faster. Judge Malloy agreed and ordered the purge, but the commission hasn’t taken action. The Republican commissioners said they had been trying to follow the order but were blocked by Democrats.

Rick Esenberg, president of WILL, said in a statement he would now focus on the appeals court.

“What is true yesterday is true today,” Esenberg said. “The Wisconsin Elections Commission isn’t following state law and we look forward to making that case in the Court of Appeals.”

The Wisconsin Election Commission had said it wanted to avoid a repeat of a previous purge, when thousands of names had been erroneously flagged.

Voters removed from the rolls can re-register to vote at the polls on Election Day at their clerk’s offices or online at myvote.wi.gov.

The decision to scrub voters’ names from the state’s registration rolls is also being challenged by the League of Women Voters of Wisconsin in federal court, CBS News reported. The organization has argued that while individuals wrongly removed from the rolls can re-register on an election day under state law, the removal was a burden on their right to vote.

It isn’t known how long the appeals court will take to review the dispute.