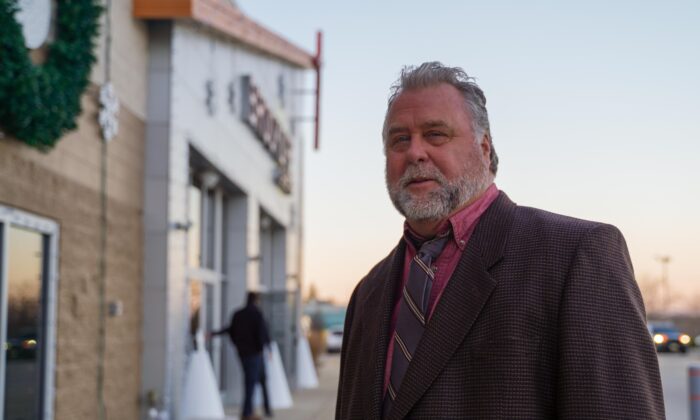 Mukwonago, Wis.—“In times like this, we trust our Lord to take care of everything,” said Nils Haldorsen, a friend of the Sparks family who lost their son in the Christmas parade attack in Waukesha, Wisconsin.

Eight-year-old Jackson Sparks was the youngest victim who died after suspect Darrell Brooks rammed his SUV into the parade on Nov. 21.

Haldorsen drove from nearby Lake Geneva to attend the funeral at Brooklife Church in Mukwonago on Dec. 2.

He spoke with The Epoch Times in the church parking lot.

“We all have free will, and Mr. Brooks chose to do that. It is very hard to reconcile with what happened, but we shall find peace and comfort in our Lord,” Haldorsen said.

When James Sparks, great-uncle of Jackson, heard of his death he could not believe it.

“The whole family were shocked,” he told The Epoch Times.

“Nothing even close to this ever happened in our family. Yes, we have grandma die, but nothing like a child.

“I am not an emotional type. I don’t hate Brooks. He slipped through the cracks. But whoever let him out on bond should at least lose his job.”

Last year, Brooks was arrested for a shooting incident in his home city Milwaukee and locked behind bars on a $7,500 bond.

Shortly before the parade attack, Brooks was arrested again in Milwaukee for allegedly running over the mother of his child with his SUV.

An assistant prosecutor reviewed the previous $500 bail, and decided to double it to $1,000 bail, which was granted by court commissioner Cedric Cornwall.

Brooks posted bail, left jail, and days later, rammed his vehicle into the parade in nearby Waukesha.

It was a tragedy that was not only unseen in the Sparks family, but also in small towns like Waukesha, Mukwonago, and Lake Geneva, all with populations around 7,000.

Many local residents told The Epoch Times that the tragedy united the communities, strengthened their faith, and prompted them to treasure life even more.

“It pulls the small town together, and they have the whole community behind them,” a man who took his son to attend Jackson Sparks’ funeral said. He declined to disclose his name.

His son was dressed in a jersey, as advised by Jackson’s parents, as a way to honor their baseball-loving son.

Another local resident’s son was in the same Waukesha Blazers Baseball and Fastpitch Softball club as Jackson and his brother Tucker Sparks. He also declined to give his name.

If his son had joined the parade as a club member, as the Sparks boys did, he could have been hit by the SUV as well, he said. Tucker Sparks suffered a fractured skull.

“It really hits home, and you realize how fortunate you are,” the father said, almost coming to tears.

“Through all this tragedy, God make things happen. Look, the whole community is united and has come together,when so many other things are divisive today.

“Our human perspectives sometimes are shorter. God has his plan,” he told The Epoch Times.

Don Richmond, a Waukesha resident, has seen his share of human tragedy, but this was the first time anything like this happened in his hometown.

Richmond volunteered many times to help residents in faraway cities hit by tornados and hurricanes.

In 2010, he went to Haiti with a medical team and saw eight to 10 amputations on children every day.

He was not at the Christmas parade when the tragedy happened, but he personally knew people who were injured, or affected, by it.

Like a 5-year-old child who saw people die in front of him, and an adult who saw a woman’s body fly through the air and land right before his feet.

“It is really a small town where people know each other in different ways, so the whole town is somehow affected, and it will take time to heal,” Richmond said.

“If you have faith in the Lord, and trust that there is a reason for what happened—even if you do not know the answer, which is always a troubling point—but if you base it on faith, you sort it out better,” Richmond said.

“One catastrophe may inspire some people to become Red Cross members, nurses, doctors, or police officers,” he said.

In the past, Richmond saw a number of people join Red Cross to help out in cities hit by hurricane Katrina—after they had been through the Sept. 11 attacks.

“Tragedies are also teaching moments when you have the chance to teach your kids lessons of life—like to appreciate every day and do not take things for granted.”