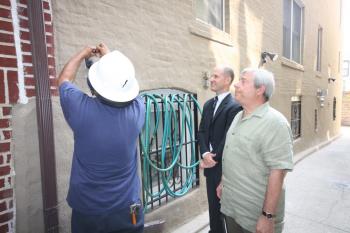 Susan Tan
View profile
Follow
biggersmaller
Print
NEW YORK—Wireless water meter readings are now available online for many Brooklynites, and will go online for New Yorkers throughout the other boroughs by next month. The announcement of the new online capability on Monday was the culmination of 417,000 of the new meters, known as Automated Meter Reading (AMR) units, by the city’s Department of Environmental Protection.

“Before AMR transmitters were installed, our customers only received a bill every quarter—just four times a year. Now, our customers will be able to see reliable and accurate measurements of their consumption, and what it costs, at least four times a day” said a spokesman for the program Michael Saucier.

That number all represents approximately half of the targeted 834,000 wireless water meters the city hopes to install by 2012. On the occasion, the DEP installed a meter in the home of Brooklyn Borough President Marty Markowitz.

The fancy new system will end the use of estimated water bills. It gives water customers more accurate records of water usage and finds better ways to conserve waters and reduce water bills, according to the DEP.

The estimated cost for the citywide installation is going to be $252 million, according to the press release released by the New York City Department of Environmental Protection.

To help customers get registered online, the DEP has developed two short instructional videos, which are available at www.nyc.gov/dep, and direct mailings are sent to customers to let them know when they can access AMR online.