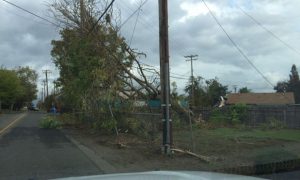 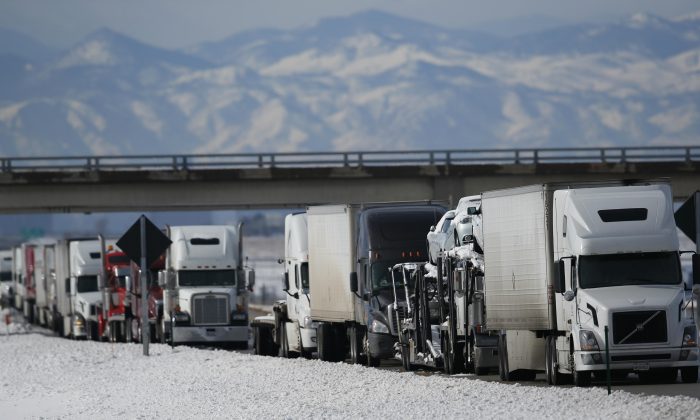 A long line of tractor trailers sit and wait at a roadblock along Interstate 70 as a winter storm packing high winds and snow blankets the plains Tuesday, Nov. 17, 2015, in Aurora, Colo. The storm has closed much of Interstate 70, Colorado's main east-west highway, because of blizzard conditions on the Eastern Plains as well as in northwest Kansas. (AP Photo/David Zalubowski)
US

DENVER—A powerful wintery storm dumped heavy snow on parts of Colorado on Tuesday while bringing the threat of tornadoes to millions in central and southern states.

Much of Interstate 70, Colorado’s main east-west highway, was closed because of blizzard conditions on the state’s Eastern Plains as well as in northwest Kansas, where up to 15 inches of snow and heavy winds are in the forecast. Dozens of semi-trailers and cars were lined up along the interstate and a nearby frontage road on Tuesday as strong winds blew snow across the road.

“I’ve got to go to Liberal, Kansas, and this is the best way to go. So I came this way not realizing that they were shutting the roads down, that it was that bad,” said truck driver Thomas Meyer, who was traveling with his dog, Little Hank.

Truck driver Fernando Rendell said he was headed to Kansas City, Missouri, but stopped after seeing two trucks in the ditch along the slick interstate.

As the system pushed east, the National Weather Service issued a tornado watch for parts of Texas, including Houston, and a large swath of Arkansas, where heavy rain had led to standing water in Little Rock and winds caused property damage in the southwest part of the state. Tornado watches also are in effect for most of Louisiana and western Mississippi through the evening hours, while Alabama is bracing for severe storms on Wednesday.

Tuesday’s storms come on the two-year anniversary of tornadoes and thunderstorms that killed eight people in Illinois. In 2015, only 10 people have died due to tornadoes—two in Arkansas, two in Oklahoma, two in Illinois and four in Texas, according to data from the Storm Prediction Center. At the same point last year, 42 people had been killed.

The storm that originated in the Gulf of Alaska could be a harbinger of El Nino, the ocean-warming phenomenon that’s predicted to bring heavy rain to the West in the coming months, said Kathy Hoxsie of the National Weather Service.

“It’s the beginning of the winter season,” she said. “We want storms. We want rain. We’ve been projecting that we’re going to have a wet winter and this is a sign that it’s going to happen.”

California in particular is anxiously awaiting winter rains as it seeks relief from its record, four-year drought. Heavy rain will help, but isn’t expected to erase the deficit. Forecasters canceled high wind warnings in Southern California on Tuesday morning, but not before downed trees blocked roads overnight and thousands of customers in Los Angeles County lost power.