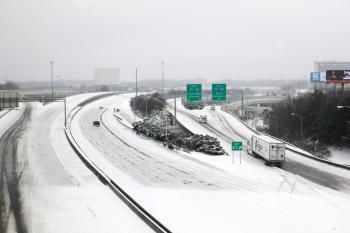 A snowy and icy view of I-20 in Atlanta is visible from a Marta train after a snow storm on January 10, 2011 in Atlanta, Georgia. (Jessica McGowan/Getty Images)
US

Annie Wu
Annie Wu joined the full-time staff at the Epoch Times in July 2014. That year, she won a first-place award from the New York Press Association for best spot news coverage. She is a graduate of Barnard College and the Columbia University Graduate School of Journalism.
View profile
Follow
biggersmaller
Print
School closings and accidents resulted when a severe ice and snowstorm hit the Southeast United States on Sunday. Dangerous traveling conditions, business and road closings, and power outages, hit the region, according to NOAA. The Red Cross issued a disaster alert for Georgia, Alabama, and the Carolinas. The agency opened shelters for stranded motorists or those without heat.

Airports in Georgia, North Carolina, Tennessee, and Alabama canceled or delayed many of their flights in the wake of the storm. Delta Airlines is planning to cancel 1,400 flights, about 25 percent of their total planned flights for the day. The large airline, based in Atlanta, announced that it will waive change fees for those who cannot follow through with planned travel during the storm. The airline also said passengers are entitled to refunds if their flights are canceled or heavily delayed.

On Sunday morning, temperatures plunged into the single digits throughout the Ohio Valley. Southward to northern Alabama, the temperatures dropped to the teens.

“For the past several days GEMA/Homeland Security has been actively monitoring and preparing for the impacts of a significant winter weather event," said GEMA Director Charley English in a statement.

The storm started in Texas last Friday, and brought thunderstorms and heavy rain to the region. It then spread eastward across the Gulf states.

Several inches of snow had accumulated in North Carolina, Georgia, and Virginia by Monday morning.

Severe icing was predicted from northeastern Louisiana to central South Carolina due to temperatures below freezing. Much of Georgia and South Carolina were covered by freezing rain, making roads icy and slippery.

The ice has also caused power lines to snap, leaving some without power.

Tonight, the storm is expected to bring snow westward to Tennessee and Kentucky. Snowfall is expected to be heaviest in the Carolinas and Georgia, where snowfall can reach up to half a foot.

Accuweather reports that the storm will likely join with another system that is currently developing in the Plains, and then reach the Northeast by the middle of the week.