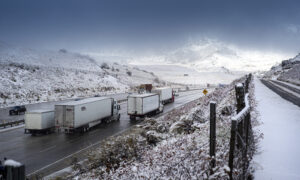 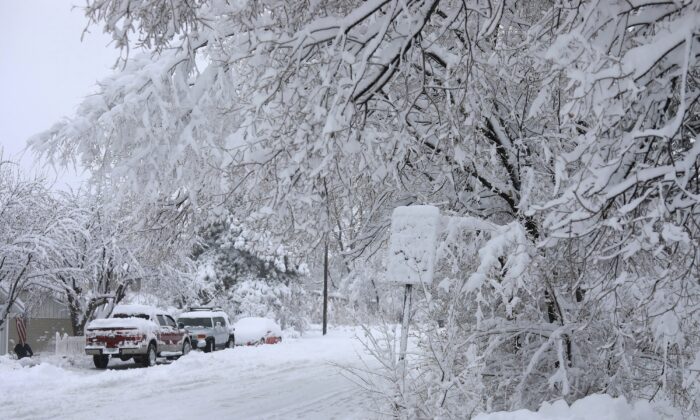 Street signs are covered in snow in north Flagstaff, Ariz. on Nov. 29, 2019. (Cody Bashore/Arizona Daily Sun via AP)
US News

Winter Storms Expected to Bring Snow Across US

Winter storms are expected to drop snow across the United States over the weekend, with winter storm watches in effect in a number of states.

In the west, Oregon was set to see several inches of snow before a storm moved into Idaho, dropping up to seven inches. Portions of Montana, Colorado, Utah, and Wyoming already had snow or were expected to see snow.

In the Midwest, forecasts say up to half a foot of snow could drop in Michigan. South Dakota, Iowa, and Nebraska were among other states that weather experts said will likely experience snowfall.

In the east, Pennsylvania, New Jersey, and Massachusetts are among the states that could see snow accumulations of up to 11 inches.

“Travel could be very difficult to impossible. The hazardous conditions will impact the holiday weekend travel on Sunday as well as both morning and evening commutes on Monday,” the National Weather Service said in one forecast for New York state.

I-40 remains closed in both directions between Kingman and Winslow. This is what the highway looks like at mile 91, about 40 miles east of Kingman. https://t.co/NL8OBJ3GAz has photos that show conditions across Arizona. Be safe today. pic.twitter.com/APD6dOakAO

Snow had already dropped in parts of California, Oregon, and Arizona, causing traffic issues and knocking power out for thousands of households.

Some major roads were closed on Black Friday in Arizona, including I-40 between Kingman and Winslow. A shelter was opened at Grand Canyon National Park for the more than 1,000 people who were left without heat and power.

In California, a significant portion of I-5 was closed because of snow, in addition to several other major routes. There were whiteout conditions around parts of Lake Tahoe.

“The timing is unfortunate for holiday travel because it’s going to have a lot of wintry impacts,” Kevin Durphee, a meteorologist with the National Weather Service, told KFSN-TV.

“There’s going to be a lot of extra vehicles on the roadway. Give yourself plenty of time when you are heading out the door and if you have a normal four hour travel time, make sure that you give yourself six hours,” said Shasta Tollefson with the California Highway Patrol.