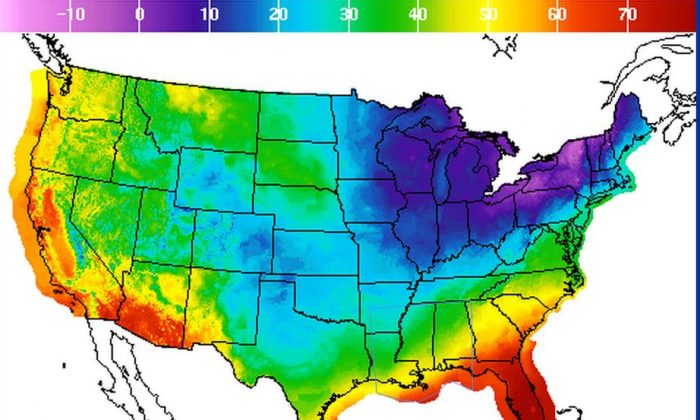 Winter Storm Quantum, as it has been dubbed by the Weather Channel, is slated to bring snow to Texas and the Southeast United States. (NOAA)
US

Winter Storm Quantum, as it has been dubbed by the Weather Channel, is slated to bring snow to Texas and the Southeast United States.

The snow will start falling in the Four Corners region, including Colorado, New Mexico, Arizona, and Utah on Monday. Oklahoma and the Texas Panhandle will also be affected.

On Monday night, freezing rain will hit eastern Texas and Louisiana and portions of central Mississippi.

The Rockies will be most impacted by Quantum, according to the Weather Channel.

The Dallas-Forth Worth metro area will also get hit with freezing rain and sleet starting Monday.

According to Accuweather.com, “The early stages of the storm have already closed schools, caused hundreds of flight delays and cancellations and contributed to scores of auto accidents in Texas alone.” It adds, “Rain will freeze on some surfaces southward to Austin, Texas, and the Hill Country northwest of San Antonio, Texas.”

Meanwhile, the harsh cold that has hammered the East Coast will linger on this week until early March.

“More than 175 million people from the Upper Midwest to the interior South and the Northeast will have to endure more extreme cold conditions this week,” says Accuweather.com in another report. “Temperatures on one to several nights will dip below zero F from the Dakotas, Minnesota and Michigan to Virginia, New York and Maine.”

“While the air masses moving through this week are not quite as extreme as that of last week, daily record low temperatures will continue to be challenged. Once again, record lows dating as far back as the late 1800s will be on the table.”

More specifically, up to an inch of ice was possible in parts of North Texas, where more than 900 flights in and out of Dallas-Fort Worth International Airport were cancelled Monday morning. The weather also prompted at least a daylong delay in the trial of the former Marine accused of fatally shooting former Navy SEAL Chris Kyle, whose memoir, “American Sniper,” was the basis for the Oscar-nominated movie.

Winter storm warnings and advisories also have been posted in parts of Oklahoma, Arkansas, Louisiana and Mississippi.

CHILL IN THE AIR

Wind chills are forecast to dive below zero in northern parts of the U.S. starting Monday afternoon. The weather service says the wind chill in Bennington, Vermont, could drop to 17 below zero, while Lake Placid, New York, could see minus 30.

In Michigan, actual temperatures dipped to 10 degrees below zero in Saginaw, Bay City and Midland, breaking the area’s record of minus 2.