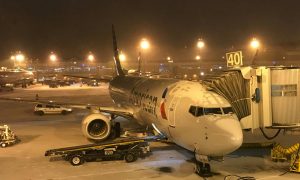 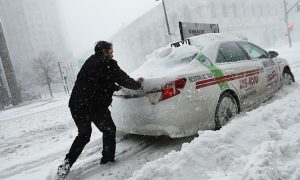 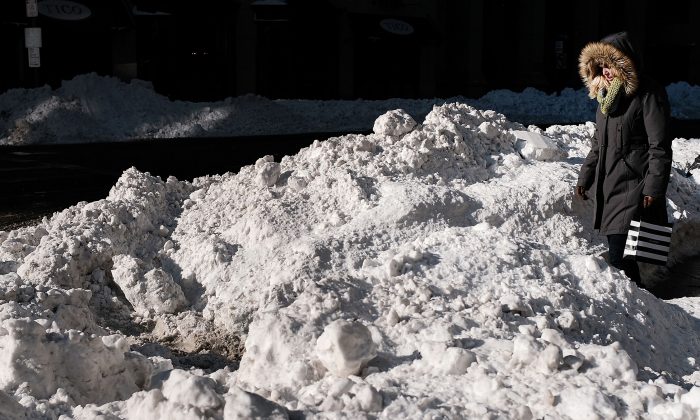 A woman walks through the snow the morning after a massive winter storm in Boston, Mass. on Jan. 5, 2018. (Spencer Platt/Getty Images)
US News

Hopefully, everyone has finished clearing the snow which piled up during Winter Storm Grayson, because Grayson’s big brother, Winter Storm Hunter, is fast approaching.

Hunter looks to be even bigger than Grayson, bringing freezing rain, then snow, then even colder temperatures than what we experienced after Grayson passed.

One benefit of Hunter’s path is that there will be no storm surge, so the coast won’t see the kind of flooding brought by the “bomb cyclone” earlier this month.

A storm system is bringing a shot for snow and ice to many areas today and tomorrow. Make sure to head to https://t.co/VyWINDk3xP for the latest on what to expect weather-wise where you are and where you're going. pic.twitter.com/dE39QfUiur

But after the rain, ice and snow to be dumped by Hunter on much of the eastern and parts of southern United States, temperatures are expected to plunge as a mass of bitterly cold Arctic air moves in.

Temperatures are expected to plummet to 12 degrees in Chicago, for instance, and to freezing or below as far south as Kentucky and Arkansas.

Can you find today's cold front? Here's the 24h temp change. This cold front will track east with rain ahead of it and #snow and #freezingrain behind it for next few days. https://t.co/cZGq8ZhLAT pic.twitter.com/7Ubo6rrzUf

#Winter weather is now occurring across the TN and OH Valleys and into the Upper Great Lakes behind a strong cold front, with rain ahead of the front. This front will shift east through tomorrow bringing #ice and #snow. https://t.co/cZGq8ZhLAT pic.twitter.com/wzMiT3xG5O

Winter weather warnings are in effect from the Great Lakes down the Mississippi Valley, to the Tennessee and Ohio Valleys, and all the way to New England, Weather.com reports.

Freezing rain and snow are already falling in Missouri, eastern Arkansas, west Tennessee, northern Mississippi, northern Louisiana and western Kentucky. Many roads are coated in ice, and power outages have been reported in Indiana and Kentucky.

This is I-55 northbound at Church Road in @DeSotoCountyMS. Please limit driving to emergencies in areas affected by #winterwx. Visit https://t.co/Z4mP4uFh2b for the latest roadway information in your area. pic.twitter.com/GO14uwtxNi

Over 11 million people are under a watch, warning or advisory for expected snow and ice this week. Get the latest detailed forecast for your location at https://t.co/Z3FIg0XW6X. ❄️❄️❄️ pic.twitter.com/Bfayok8aI6

More Winter Woes for the Northeast

The Northeast, which was hit especially hard by Grayson’s “Bomb Cyclone” effects, is in for another freeze—and maybe more rising water woes, as well.

Right now, New England is experiencing unseasonably warm temperatures, ranging from the low 50s to the low 60s, according to the National Weather Service.

When Hunter first hits, it could come as rain, melting even more of the snow which accumulated after Grayson. That water won’t have anywhere to go because the soil will be too frozen to absorb it. This could cause flooding in low-lying areas—and when the frigid air hits all that water, the Northeast could find itself covered in glacier-like sheets of ice.