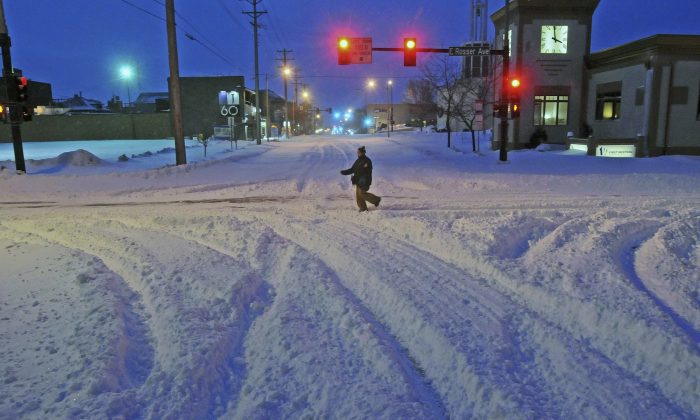 Winter Storm Could Drop 1 Foot of Snow on Northeast US

A densely populated swath of the Northeast was preparing for winter’s harshest thump yet, a fast-moving storm that could bring more than a foot of snow, strong winds and coastal flooding.

Some places were poised to experience an atmospheric yo-yo: Philadelphia and New York hit 60 degrees on Wednesday, were expecting at least a half-foot of snow on Thursday and were bracing for bitter cold temperatures Thursday night.

“This is going to be a big punch,” said Benjamin Sipprell, a meteorologist with the National Weather Service in Taunton, Massachusetts. “It’s originating in the Ohio River Valley and starts cranking as it comes across Appalachia.”

The storm was expected to hit eastern Pennsylvania and northern New Jersey with rain early Thursday morning, before changing over to snow in time for the morning commute.

The weather service predicted Boston and New York City would get 8 to 12 inches of snow and Philadelphia 6 to 8 inches. Eastport in far eastern Maine was expecting over a foot.

Near whiteout conditions were possible, with snow expected to fall at a clip of 2 to 4 inches per hour at the storm’s height. The weather service issued a blizzard warning for some coastal areas.

A Winter Storm Watch is in effect for the entire area for Late Wednesday Night and Thursday! #snow pic.twitter.com/dNhyr6Ld0K

High winds moving in on the storm’s heels could bring gusts of up to 50 mph, leading to power outages. Temperatures were also forecast to drop into the 20s across much of the region.

Many communities announced parking restrictions in advance of the storm, and some school systems canceled classes on Thursday, including Providence, Rhode Island. Connecticut canceled most court activities on Thursday.