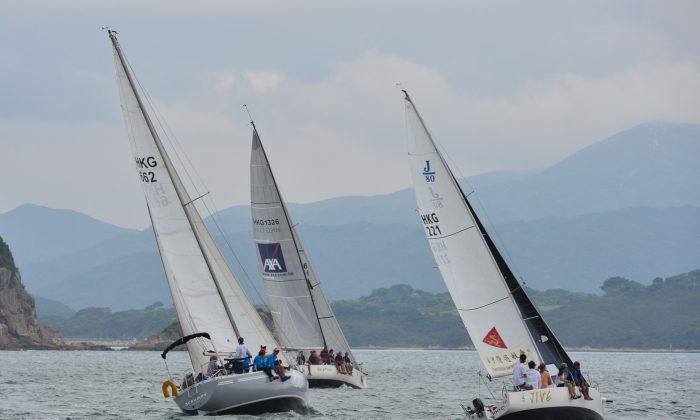 HONG KONG—The Hebe Haven Sin Fung Winter Saturday Series started on Saturday Nov 7, 2015 with 35 boats competing over 4-classes, the series will comprise 7-races mainly set within Port Shelter. Conditions were good with a 7-12 knot easterly wind and although a bit dark at times the rain storms forecast, stayed away.

Race Officer of the Day, Julie McKenzie was restricted in race configuration by other happenings in Port Shelter but managed to set a long sausage course for the IRC and Sportsboats with a shorter A2 mark laid for the HKPN and Dragon Class boats. The two races were well organized and the wind maintained strength throughout the afternoon.

In IRC “Calamansi” helmed by Rob Berkley had a good day finishing first and second respectively in the two races. “Jazz” (Justin Shave) came second in Race-1 followed by “Mojito” and “Talkinghead”. In Race-2, “Mojito” the line honours winner in both races came first on corrected time with “Calamansi” 2nd, “Stella” 3rd and “Lighthorse” 4th.

There was a good turnout of eleven Dragons with “Zephyr” taking 1st in both races with “Mei Fei”, “Celines” and “Wudi” taking the next 3-places in race 1 and in Race-2 “Wudi”, “Eaux Vives” and “Celine” took positions 2 to 4.

Next Race
The next race day for the Winter Saturday series is on Nov 21, 2015.