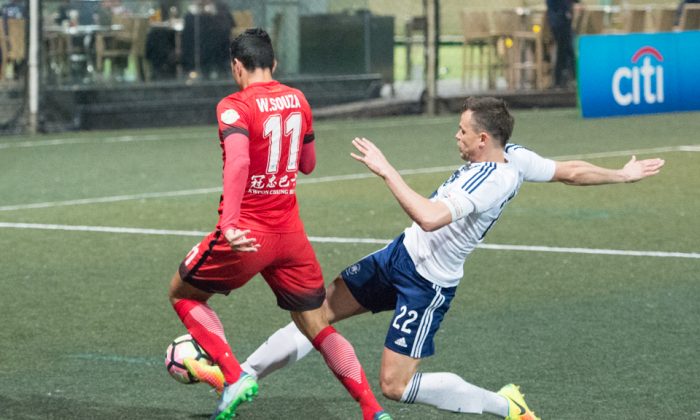 HONG KONG—The BOC Life Hong Kong Premier League games resumed on Friday (Feb 3) night, with the game between Hong Kong Football Club and Kwoon Chung Southern at Hong Kong Football Club, Sports Road. Kwoon Chung Southern have recorded good wins in this year’s prior encounters and, after spurning a couple of early chances, were quickly into the lead in the 14th minute when, after chasing down a long ball, Marcos Jiminez advanced, shot, and squeeze d the ball past HKFC’s custodian Issey Maholo. Kwoon Chung Southern extended their lead in the 26th minute when, after a long ball down the right hand side from Roberto Fronza, Leung Tsz-chun collected the ball and crossed for Tomoya Uchida to score with a neat near post finish.

Kwoon Chung Southern added a third in the 38th minute when a Wellingsson De Souza cross was converted by Marcos Jiminez at the near post, and then added a fourth in the first half when James Ha volleyed in Michael Luk’s free kick, Although they still dominated the second half, Kwoon Chung Southern added two more goals, a 72nd minute header by Roberto Fronza from a Leung Tsz-chun corner, and a n 84th minute sixth when Wellingsson De Souza produced a solo run down the right hand side before cutting in an shooting past goalkeeper Issey Maholo.for a convincing 6-nil scoreline.

Saturday (Feb 4) saw Lee Man Rangers take on South China at Sham Shui Po Sports Ground with South China prevailing courtesy of a finish from Marko Perovic.Nikola Komazec fired a left wing shot which hit the post and rebounded where Marko Perovic crashed the rebound into the back of the net, resulting in a 1-nil victory.

Wo Foo Tai Po then took on R&F at Tai Po Sports Ground on Sunday (5 Feb), In a hard fought game Wo Foo Tai Po took a 7th minute lead when Lucas Da Silva converted Tan Chun-lok’s pass, with R&F equalising in the 20th minute from a close range header from Tommy Chuck. Despite both sides having chances, Wo Foo Tai Po sealed the win in the 81st minute when Luis Eduardo heade in Wong Yiu Fu’s cross to claim the 3 points.

Eastern Long Lions then took on KMB Yuen Long at Mongkok Stadium , and claimed the points with 2 second half goals, a 50th minute strike from Wong Tsz-ho, and a 66th minute second from Manuel Rodriguez .

Eastern Long Lions led the table with 30 points with Kitchee second with 27 points both from 12 matches. South China and KMB Yuen Long are both on 23 points.

Sun Hei lead the table with 38 points from 14 games with Wong Tai Sin second with 37 points also from 14 matches.

Central & Western lead the table with 27 points from 12 games with Hoi King second with 26 points from 11 games.

Happy Valley lead the table with 34 points from 14 matches, with Wing Go Fu Moon second with 32 points, and GFC Friends third with 31 points from the same matches.

In the 14th round of first division matches, Wanderers were 6-1 victors over French Kiss, KCC Knights drew nil-all with Baker Tilly Spartans, Colts were 2-1 winners against GAS, KCC Dragons won 1-nl against Colloids FC, and Squadron were 3-1 winners against Swiss XI.

Wanderers lead the table with 34 points from 13 matches, with Colts second with 31 points from the same games, and Albion third with 28 points from 12 matches.

Azzurri and Carnegies Boca Seniors are joint league leaders with 34 points from 14 matches.

In the third division, Goal Visio drew 1-all with Darts, University were 3-1 victors over Outward Bound, Friends of Barclays game with HKSS was abandoned, Power 22 won 4-2 against Scorpions, HOB were 1-nil victors over Antonhill, and Maccabi HK drew nil-all with Yan Po.

Maccabi HK lead the table with 35 points from 14 matches, with Yan Po and Antonhill second with 32 points from the same games.

In the fourth division, Gurkha International drew 2-all with BOC, WYFC84 were 3-1 victors over Standard Chartered, CAPS were 4-1 winners against Bapcoll, Corinthians won 3-nil against Rising Sun, and Hung Art were 2-nil victors over Skyline.

Corinthians lead the table with 29 points from 13 matches, with Green Cypress FC second with 28 points from 12 games.