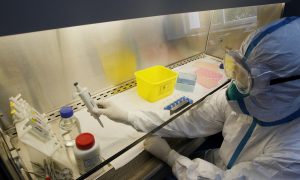 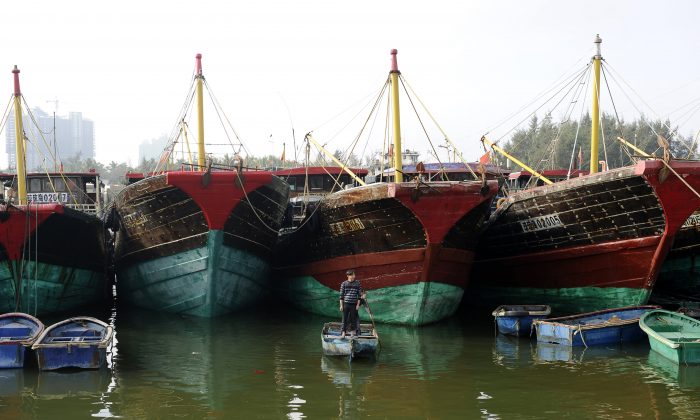 A Chinese fisherman in front of fishing vessels in the sea town of Tanmen, in China's southern Hainan Province, on Jan. 21, 2013. With Beijing claiming a huge swath of the strategically crucial South China Sea, Hainan's fishermen and tour agencies are at the forefront of the dispute. (Wang Zhao/AFP/Getty Images)
Opinion

Winning Without a Fight in the South China Sea

China’s launch of its first aircraft carrier caught the world’s attention in 2012. With the reconditioned Russian vessel, China would enforce its extensive claims on the South China Sea, observers speculated, though pressing the Liaoning into active duty was years away.

Earlier this month China introduced of a more effective weapon system to assert its territorial claims—a cruise ship with thousands of tourists. Deployment of a tourist boat along with myriad other vessels to establish its claims in the South China Sea has given new meaning to China’s claim of a “peaceful rise.”

Since the 1950s, Chinese maps have shown nine elongated lines along the coastline of China and Southeast Asia to mark its territorial control. Efforts to clarify the meaning of that U-shaped line tended to become lost in a miasma of contradictory, confusing statements.

Even if intended as a sovereign boundary, the lines were not taken seriously. But in 2009, China submitted that map to the U.N. as marking its “indisputable sovereignty.” China’s actions since have left no doubt that the most senior levels of the Chinese government view the U-shaped line as a legitimate, enforceable, maritime boundary.

A series of incidents with its Southeast Asian neighbors involving Chinese fishing and patrol vessels and strident public claims raised public awareness in July 2010 when U.S. Secretary of State Hillary Clinton called on China to resolve the dispute peacefully.

China responded by stepping up enforcement capabilities and deploying a smorgasbord of government maritime agencies: the Maritime Safety Administration, the Fisheries Law Enforcement Command, the State Oceanic Administration, and China Marine Surveillance. They also enlisted the China Coast Guard under the Ministry of Public Security and provincial-level maritime authorities, most notably those of Hainan Island—all distinct from the rapid growth of the Chinese navy and air force.

China’s first aircraft carrier received much attention, but for the near future it’s a training platform, not an operational military asset. Maritime police in their multiple manifestations are another matter.

Growth of that force is spelled out by the Beijing correspondent for The Los Angeles Times: For example, since 2000 the Chinese military has transferred 11 former warships to the Marine Surveillance agency, which has built 13 ships of its own and plans 36 more. The Fisheries Law Enforcement Command recently took control of a former warship equipped with a helicopter landing pad. Those new vessels are kept busy. The U.S. Pacific Command estimates that the number of long-range patrols by Chinese maritime police in the South China Sea has tripled since 2008.

As U.S. Navy Capt. James Fanell observed in the Times article, “Chinese maritime surveillance cutters have no other mission but to harass other nations into submitting to China’s expansive claims.” They have cut cables towing Vietnamese sonar arrays, arrested and intimidated Southeast Asian fishermen, harassed U.S. naval vessels and, in one case, erected a barrier to establish China’s exclusive control. These non-naval Chinese vessels are not equipped with military weapons, but demonstrate prowess with water cannons and grappling hooks—sparking frustration and a sense of helplessness among China’s neighboring countries.

China may have shot itself in the foot strategically, but not at the tactical level. Southeast Asian countries lack the capability to match the Chinese on or over the water with military or coast guard assets, a gap in capabilities growing monthly. Bluntly put, Chinese maritime enforcement agencies can muscle other Southeast Asians aside at will—with Vietnamese military outposts being the principle possible exception.

Meanwhile, the United States has long declared that it takes no position on territorial claims in the South China Sea, insisting on two principles: maintenance of international sea lanes in the area as a “global commons” and resolution of territorial disputes without using military force. By using unarmed coast guard forces to enforce claims, China exploits vulnerability in the U.S. position.

China’s leverage over Southeast Asia includes a major economic component. As late as the 1990s, the United States and Japan were major economic partners of Southeast Asia. No longer—China has displaced both to become the major trading partner to the region—while its investment footprint continues to grow rapidly. The linkages go beyond simply exporting goods, services, and money.

With the ASEAN-China Free Trade Agreement as a centerpiece, China has negotiated a plethora of economic agreements with the region including an array of infrastructure projects linking Southeast Asia with southern interior China. Chinese companies are building impressive rail, road, and riverine networks plus power grids and ports—knitting Southeast Asia and China together in an integrated economic unit. It doesn’t take great acumen to imagine how these linkages and related dependencies can be used for strategic leverage and to disrupt other regional ties. At the 2012 ASEAN foreign ministers meeting hosted by Cambodia, a dispute arose when the Philippines insisted that the joint communiqué concluding the gathering contain a reference to Chinese actions in the South China Sea.

The Cambodian chairman refused, and the meeting dissolved in acrimony. Cambodian officials privately made it clear that they acted in response to a demand from China, backed by a threat of severe economic consequences if Phnom Penh did not comply. In effect, Beijing demonstrated the capability to veto any united position in ASEAN regarding the South China Sea.

China’s introduction of a tourist cruise boat in the contested waters presents the region with another challenge. No Southeast neighbors would dare shoot at a vessel in what they consider their territory if the ship carries civilian tourists.

It can be argued that China’s decision to strip away the veil of ambiguity over its territorial intentions in the South China Sea was a strategic blunder. It’s generated alarm in Southeast Asia, particularly in governments that have their own claims in the area—Vietnam, Brunei, Malaysia, the Philippines and even Indonesia. It also produced the U.S. “pivot” toward Asia, including statements by the secretary of defense that U.S. forces would be redeployed to Asia and those redeployments would be shielded from budget cuts.

Governments in Vietnam, the Philippines, Singapore, and Indonesia have moved overtly to strengthen security cooperation with the United States. A region once broadly relaxed and well-disposed toward China is now very much on edge.

The strategic future of Southeast Asia and its maritime precincts is neither cut and dried nor predictable. China has staked out a dramatic, even brazen claim, one lacking support in international law, to territory not under its historical control. However dubious the claim may be on merits, China has developed the tactics and leverage to make that claim a first-order strategic challenge to the region and the United States.

Marvin Ott is a public policy scholar with the Woodrow Wilson International Center for Scholars and adjunct professor and visiting research scholar with Johns Hopkins University. With permission from YaleGlobal Online. Copyright © 2013, Yale Center for the Study of Globalization, Yale University.