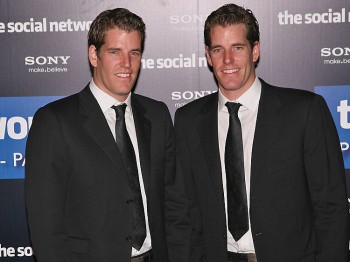 Ridge Shan
View profile
Follow
biggersmaller
Print
The Winklevoss twins, Tyler and Cameron, who had gone to Harvard University with Facebook founder Mark Zuckerberg, have dropped their planned Supreme Court appeal for the settlement reached after their lawsuit against Zuckerberg and Facebook in 2008.

The Winklevosses claimed that Zuckerberg stole the idea for Facebook from their service ConnectU. The twins began their efforts to present legal action against Zuckerberg in 2003.

The original settlement, reached after years of deliberation, gave the Winklevoss twins $20 million in cash and $45 million in Facebook stock.

The Winklevosses later contended that Facebook had concealed the true value of its assets, and appealed for a reversal of the settlement. In April, an Appeals Court decided against the Winklevosses and ordered them to accept the original settlement.

The Winklevosses planned on moving their appeal up to the Supreme Court, but announced yesterday that they were giving up those efforts and were going to accept the original settlement once and for all. They offered no explanation for the decision.

The conception of Facebook and the process of the original lawsuit between the Winklevosses and Zuckerberg were fictionally portrayed in the 2010 film The Social Network.