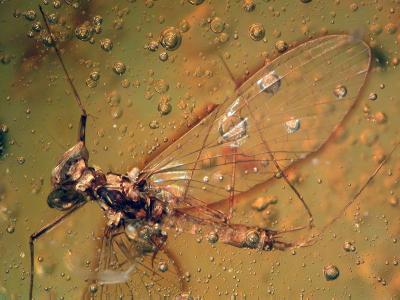 Wingless Bugs May Have Hitched Ride on Mayflies

A small arthropod called a springtail has been discovered on a mayfly preserved in amber 16 million years ago.

Springtails are typically found in caves, where they feed on detritus and fungi. They belong to the class Collembola, and have six legs, like insects, but lack wings.

This is the first time a springtail has been found on a winged insect, and is thought to be an example of phoresy, whereby one organism transports another in a non-parasitic relationship.

The only other known instance of springtail phoresy is a piece of amber containing a harvestman spider with five springtails on its leg.

“I had initially thought the creature on the mayfly may have been a tiny nymphal pseudoscorpion, as they are known to use other creatures for transport, and this behavior is not uncommon to see in amber,” said study lead author David Penney at the University of Manchester in a press release.

The researchers took more than 3,000 X-rays of the fossil with a high-resolution CT scanner, and generated cross-sections that were used to make 3D digital images of the springtail.

Previously, springtails were thought to travel via the wind or in ocean currents. Mayflies have very short lives and only fly for up to a few days. They have not been observed to transport other bugs, either past or present.

“This is a truly remarkable specimen,” Penney said.

“It highlights the potential for such fossils which provide snapshots of behaviors ‘frozen in time’ to provide clues to ecological associations occurring right under our noses today, but which may have gone unnoticed to date.”

The study was published in PLOS ONE on Oct. 17, and can be accessed here.