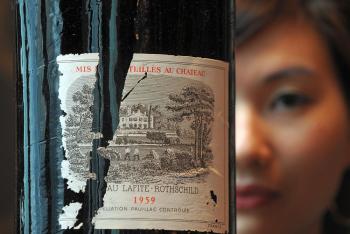 A model shows a bottle of a bottle of Chateau Lafite Rothschild (about US$20-30,000) at an auction preview in Hong Kong on January 28. Alarm bells are ringing over possible fraud involving Chinese wine. (Mike Clarke/AFP/Getty Images)
International

By Sonya Bryskine
Print
Bordeaux Index, one of the top wine merchants in Europe, has sounded alarm bells over a possible scam in China that could see hundreds of buyers pay, but not receive expensive premier wine.

The 2009 Bordeaux label has not yet been released, but orders have already started in China—a market that has seen a huge growth in expensive wine consumption over the last five years.

“There's huge interest in the 2009 Bordeaux from China,” said Sam Gleave, the sales director of Bordeaux Index in a Telegraph report.

“In an unregulated and uneducated market, there was always potential for rogue trading. Unfortunately, it seems as if that potential has been realized.”

A single case of Premier Cru Bordeaux 2009—the wine produced by the top five chateaux of Lafite Rothschild, Margaux, Latour, Haut-Brion and Mouton Rothschild—is expected to fetch 3,800-4,500 pounds (US$5,800-US$6,866) per case on release.

Nick Pegna, the managing director of Berry Bros & Rudd's Hong Kong office, said fraudulent vendors were seeking to take advantage of relatively uneducated Chinese consumers who have only started buying significant amounts of top wine in the past five years, reports the Telegraph.

He draws on previous years of experience, where consumers were ripped off by rogue suppliers.

“We saw fraud in 2005 when companies sold wine and never delivered and I expect it will happen again this year.”

In a unique system called en primeurs, Bordeaux’s most exclusive wines, the grands crus classés, are sold as a futures commodity 12-18 months prior to bottling.

The merchants are allocated a specific number of cases for sale. It may take years, even decades, to acquire large allocations of top wines. Brokers act as middlemen, earning a 2 percent commission on every transaction.

AFP reports that according to Francois Leveque, president of the Bordeaux wine and spirits brokers’ syndicate, so far, none of the 2009 vintage grand cru classé wines has been released for sale.

“We are waiting for Robert Parker’s ratings today,” said Mr Leveque. In a spectacular vintage like 2009, the wine critic’s ratings will fuel the excitement and generate dynamic trading. “The real campaign will begin next week.”

The Chinese market has become the largest consumer of Bordeaux wines outside of the EU. However, the newly established hub is full of novices who can be vulnerable to fraudulent merchants.

The full effect of the crime will only become apparent in a few years, when the paid customers will find themselves not receiving the prized bottles.

Merchants from Bordeaux to London to Hong Kong urged consumers to proceed carefully.

“The next few months could easily be used, wittingly or unwittingly, by wine shops all over the world to sell bogus stock,” cautioned Staples from London, according to AFP.

“Make sure that the merchant you buy from has been trading en primeur for 10 years at a minimum and will be solvent in 2012-2013.”

He explained, “New merchants will not have positions on these wines and they will not be able to fulfill the orders.”