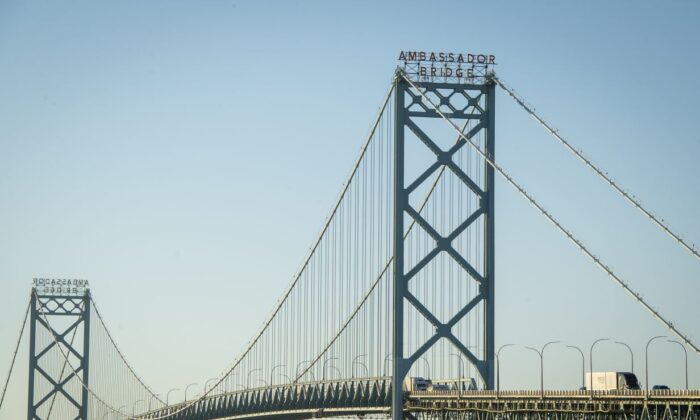 The mayor of Windsor says he is concerned that the demonstration that has led to the temporary closing of one of the busiest crossings between Canada and the United States will leave “lasting and permanent impact” on the local economy, though he is not planning on removing the protesters by force.

On the night of Feb. 7, protesters opposing the Canadian government’s COVID-19 mandates started to gather on the Ambassador Bridge, the crossing that connects Windsor, Ontario, and Detroit, Michigan, which Mayor Drew Dilkens said is vital for moving goods across the border.

“I’m very concerned about the lasting and permanent impact that this demonstration and protests will have on the region’s economic competitiveness,” Dilkens said at a press conference on Feb. 9.

“Businesses require certainty. They require a certainty of movement with many operating, including our auto sector, on a just-in-time delivery model. If Canada becomes known as a difficult jurisdiction to do business with, to move goods in and out of, for example, then supply chains will evolve and reconfigure to remove this element of risk and avoid cities and communities like Windsor-Essex.”

LIVE NOW: Join us for an update on the local response to the protests taking place in the city along Huron Church Road. https://t.co/qhLDKB0Nzp

The Canada Border Services Agency has marked the Ambassador Bridge as “temporarily closed” as of Wednesday evening.

The Michigan Department of Transportation (MDOT) wrote on Twitter on Wednesday that the exit ramps of the bridge to Canada in Detroit are closed, and advised taking the Port Huron Blue Water Bridge and the Detroit–Windsor Tunnel.

The wait time at the Detroit–Windsor Tunnel was five minutes for both commercial and passenger vehicles as of 5 p.m. on Feb. 9.

other on I-75
Location: Both Directions I-75 at Bridge to Canada
Lanes Blocked: Exit Ramp
County: Wayne
Event Message: BRIDGE TO CANADA IN DETROIT EXIT RAMPS ARE CLOSED. USE PORT HURON, NON-TRUCK TRAFFIC USE WINDSOR TUNNEL@Modernize75

The Windsor protest is in solidarity with the ongoing truckers’ “Freedom Convoy” demonstration in Ottawa. The protest initially began to oppose the federal government’s COVID-19 vaccine mandate imposed on cross-border truck drivers, but quickly expanded to a national movement supported by many who want an end to all pandemic-related mandates.

Dilkens said the Ambassador Bridge protest has been “peaceful and without incident.”

However, the mayor said he has spoken with officials at both the provincial and federal governments over the past 24 hours to formally request additional resources.

“We need to plan for protracted protests and have requested additional personnel to be deployed to Windsor to support our hard-working members of the police service. We are striving to resolve this issue safely and peacefully,” Dilkens said.

He said he received complaints and calls from local residents and business owners who want the protesters forcibly removed, but added that he will refrain from taking that step for fear that more people will protest.

“While it may be gratifying for some to see the forced removal of the demonstrators, such action may inflame the situation and certainly cause more folks to come here and add to the protest, and we don’t want to risk additional conflict,” the mayor said.

Pam Mizuno, chief of the Windsor Police Service, said approximately 50 to 75 vehicles and roughly 100 protesters remained in the area as of the morning of Feb. 9.

The protesters have left one lane open southbound on Church Road for emergency vehicle access, and they are not interfering with traffic traveling east or west on College Avenue or Tecumseh Road and have been cooperating to give access for emergency responses, Mizuno said.

“Our goal is to open all lanes of traffic on Huron Church Road. In order to do that, we are taking a diplomatic approach and attempting to negotiate a safe and sustainable resolution,” she said.