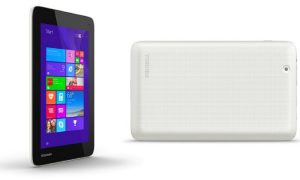 Microsoft's strategy to combat low-priced Android devices appears to be paying off. The WinBook TW70CA17 is a 7 inch Windows 8.1 tablet and it costs $59.99
By Brad Sams
biggersmaller
Print

Microsoft’s strategy to combat low-priced Android devices appears to be paying off as vendors are now pushing down on the floor to create ridiculously low priced Windows tablets. The WinBook TW70CA17 is a 7 inch Windows 8.1 tablet and it costs $59.99.

The device is on-sale at MicroCenter and is good for in-store pickup only. The specs, as you would expect at this price point, are entry level but include an Intel BayTrail-T Z3735G 1.33GHz Quad-Core CPU, HD IPS LCD 7″ 1280×800 display, 1GB RAM & 16 Flash storage and there is a microSD card slot too.

There are even cameras on this budget friendly device with a 2MP front and rear shooters.

You would think at this price point that’s about all you would get but there is also one USB 2.0 port, 3.5mm audio jack, one micro USB and a micro HDMI port too.