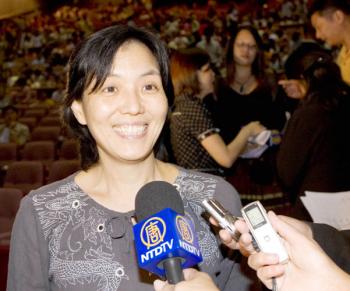 Ms. Huang Tsui-mei, dean of the College of Letters and Culture Heritage, the National Tainan University of Arts, watched Shen Yun in Chiayi on March 11, 2009. (The Epoch Times)
US

There’s a boom in wind energy occurring worldwide. Keen to meet environmental targets and cut back on fossil fuels, governments in Europe, North America, Australia, and Japan are increasingly looking to wind as a source of power.

In Canada, wind turbines have become part of the landscape in many rural areas, with Ontario, Alberta, and Quebec leading the way in setting ambitious targets for future production of wind power.

From the Maritimes to Alberta, there are about 1,500 turbines powering almost 700,000 homes and businesses, with plans in the works to build another 1,000 to 1,500 in the next year, including in British Columbia where none currently exist.

But as wind farms proliferate, so do complaints about them. While some people experience no negative effects whatsoever, others have even resorted to leaving their homes to get away from the windmills they claim are making them sick.

While research into the problem is lacking, some who live near the big turbines cite a raft of adverse health effects, including severe headaches, insomnia, dizziness, ringing in the ears, exhaustion, and even blood pressure and heart problems.

Glen Wylds says he and 11 of his neighbours who live in the Ripley wind turbine complex in Ontario have been afflicted with a wide range of serious symptoms since soon after the hydro configuration to their homes was changed in November 2007. This was done to collect the electricity generated by the 38 turbines surrounding their homes.

Wylds’ first symptom was severe itch, while his wife “just kept getting sicker and sicker.” The couple began experiencing intense headaches and earaches, with their hearts “pounding something awful,” says Wylds. Their two dogs developed ear problems and lost their hair.

The problem was traced to stray voltage—electrical pollution from the high-voltage wind turbine lines—invading their homes.

Acciona Energy and Suncor Energy Products, the companies that own the Ripley complex, buried some of the power lines but the problems continued. Wylds says the company billeted some families in motels in nearby Kincardine, but when they returned to their homes their symptoms reappeared.

Having had enough, Wylds eventually bought a house in Kincardine, but he needs to regularly return to Ripley to tend his herd of 500 cattle. As soon as he sets foot in the house, he says, his symptoms return.

He says his doctor has advised him not to return to the house, which he moved into in 1973 and where he planned to live out his old age.

Wind energy advocates say studies show no proof that turbines cause health problems and that residents who live near wind farms have few complaints about them.

Sean Whittaker, VP of policy for the industry-affiliated Canadian Wind Energy Association, says he’s aware of claims that turbines cause health problems for some people, but several studies have produced no evidence that this is the case.

“It’s hard to say why these things are happening. It’s certainly of concern, but you do have to look at the peer-reviewed research that’s been done on the subject and what that tells you.”

Whittaker cites in particular a comprehensive study commissioned by the British government which looked into the low-frequency sound produced by turbines that many suspect is having an impact on their health. The study found that turbines can’t produce infrasound at levels that affect humans.

He says polls show 87 percent of people agree with having more wind turbines, and that figure rises to 97 percent for those living within one kilometre of a wind farm.

“It’s important to point out that worldwide there’s something like 30 or 40,000 turbines,” Whittaker says. “People have been living around wind turbines for a very long time. In places like California, Denmark, and Germany, people have lived around them for 15 to 20 years and more. Complaints about the turbines are very few and far between.”

One of the few provinces with regulations governing wind farms, Ontario requires a noise-impact assessment for buildings up to 1,000 metres from a turbine.