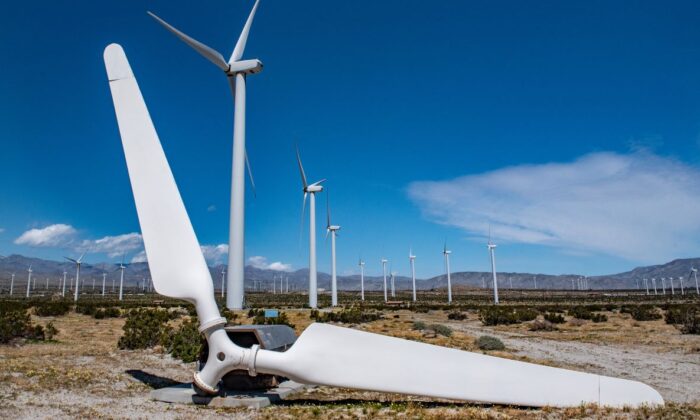 Wind turbines across the United States have been failing more frequently in recent times, triggering concerns about additional costs resulting from such failures as well as their impact on wind-power projects. Offshore wind farms, deployed in the name of environmentalism, are now seen as disastrous for ocean life.

Some turbine failure include the one in the town of Ames, Oklahoma, where a wind turbine hundreds of feet tall collapsed in June. Manufactured by General Electric (GE), the turbine had been in operation for less than a year, according to a Bloomberg report. In Colorado, another GE turbine collapsed a few days later. The operator of the wind farm, NextEra Energy, blamed a blade flaw for the incident. In Dodge County, Wisconsin, part of a wind turbine owned by NextEra plummeted to the ground last week. Similar wind-turbine malfunctions have been reported in Europe as well.

These turbine failures are now occurring more often, and some experts are getting increasingly worried by the phenomenon. “We’re seeing these failures happening in a shorter time frame on the newer turbines, and that’s quite concerning,” Fraser McLachlan, chief executive officer of London-based GCube Underwriting Ltd., said to Bloomberg.

If the failure rate continues to increase, either new insurance coverage would be imposed or premiums would rise, he added. GCube, for example, insures roughly $3.5 billion in wind assets in 38 nations, said the report.

Malfunctions in wind turbines range from small issues, like some key components becoming faulty, to full-blown collapses. Large wind-turbine makers like Siemens Gamesa, Vestas Wind Systems, and General Electric are having to bear additional hundreds of millions in costs due to these breakdowns.

For instance, GE reported a $500 million charge in the third quarter to cover repair and warranty costs of its turbines, according to Bloomberg. In 2019, Vestas set aside around €600 million for annual warranty provisions. This jumped to €1.2 billion in 2021.

The Epoch Times has reached out to Siemens Gamesa, Vestas Wind Systems, General Electric, and NextEra.

The increasing costs resulting from turbine failures will only add to the difficulty of expanding wind power in America as it will make such power generation more expensive, and economically unfeasible.

In the United States, the Biden administration has set a target of establishing 30 gigawatts of traditional offshore wind facilities in the country’s federal waters by the end of this decade. However, many wind-power projects are already facing cost issues.

In Rhode Island, for example, utility regulators are weighing suspending Mayflower Wind Energy’s application to set up transmission cables for the first part of a proposed wind-power project off Massachusetts. The project costs $5 billion, and questions are being raised about its financial viability, according to the Institute for Energy Research (IER).

Offshore wind power projects are also facing opposition due to their alleged negative impact on whale populations and the environment.

The installation of wind turbines as well as the noise created by their operation can have a harmful effect on whales. Last year, an official from the National Oceanic and Atmospheric Administration’s (NOAA) Northeast Fisheries Science Center (NEFSC) warned against setting up wind projects off the coast of New England because it would threaten the population of right whales in the region.

In 2011, there were around 478 of these creatures, a number that came down to 350 in 2022. Rep Jeff Van Drew (R-N.J.) is demanding an end to offshore wind activity in New Jersey after an “unprecedented” number of whales washed ashore in the region during recent weeks.

“Ocean life is being put at risk as our governor and president force through their Green New Deal policies without giving full consideration to their real-world impacts,” he said.

In April 2022, ESI Energy, a subsidiary of NextEra, was ordered to pay $35 million in fines, mitigation measures, and restitution fees for having killed 150 American bald eagles.