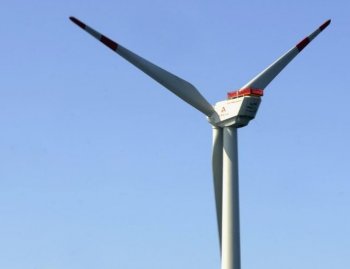 Cape Cod Wind Farm: The offshore wind power farm 'Alpha Ventus' is pictured off the northern German Island of Borkum on April 23. A similar wind farm will grace Cape Cod in the Nantucket Sound of Massachusetts starting in 2013. (David Hecker/AFP/Getty Images )
US

By Antonio Perez
Print
The country’s first offshore wind farm, to be built off Cape Cod in Massachusetts, has reached a deal with its first customer to purchase its electricity.

The Cape Wind project reached a deal last Friday with National Grid, a global utility delivery company, to sell electricity at 20.7 cents per kilowatt-hour beginning in 2013.

National Grid’s contract is for five years, and the electricity price would rise 3.5 percent annually to keep pace with inflation. At the outset, this translates to a total monthly bill increase of $1.59 for an average residential customer, the company said.

“We recognize that all renewable energy, be it on-or-off-shore wind, solar, or other sources, has a cost associated with it,” said National Grid’s U.S. President Tom King in a company statement. National Grid hopes that customers would shell out the additional cost for a smaller carbon footprint.

State regulators still have to approve the deal.

“We believe this project will provide long-term economic and environmental benefits here, throughout the region and across the nation,” said King. “We absolutely must develop our homegrown renewable energy resources if we are to meet state and federal renewable goals, secure our energy future, and seize the leadership position in the global clean energy economy.”

But the project is not without its critics. The Alliance to Protect Nantucket Sound, a community organization, said that the deal would cost Massachusetts residents and businesses $884 million more in energy costs over 15 years.

“Massachusetts is already paying some of the highest electric rates in the country—a burden that has forced businesses to leave and families wondering how they will make ends meet,” said APNS President Audra Parker.

Other organizations, such as Associated Industries of Massachusetts (AIM), have also spoken out against the extra cost during a time residents are least able to afford.

“The governor should condemn this contract as unaffordable,” Robert Rio, senior vice president of the AIM said in a statement.