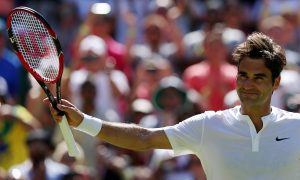 What is Happening at Wimbledon?
0
Share Now
TelegramFacebookTweetEmailTellMeWeReddit
Copy Link 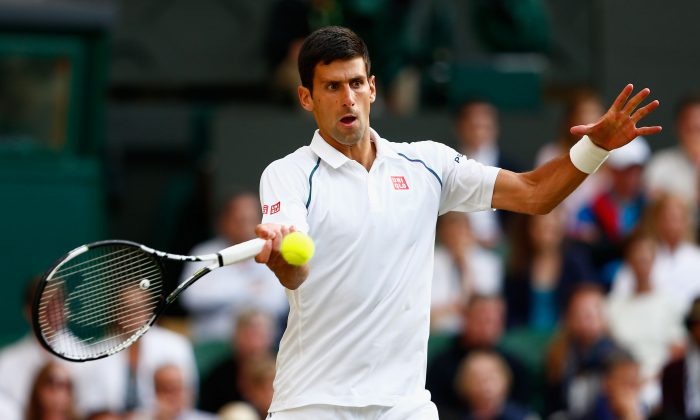 Novak Djokovic of Serbia plays a forehand in his Gentlemens Singles Quarter Final match against Marin Cilic of Croatia during day nine of the Wimbledon Lawn Tennis Championships at the All England Lawn Tennis and Croquet Club on July 8, 2015 in London, England. (Julian Finney/Getty Images)
HK Sports

LONDON—Following the Quarter Finals of the Wimbledon Championships 2015 completed over the last two days the big Semi-final encounters are Serena Williams against Maria Sharapova billed as the second match on Centre Court today Thursday July 9 and Roger Federer against Andy Murray in the Gentlemen’s singles Semi-final tomorrow Friday July 10.

Ladies singles
If Serena Williams and Maria Sharapova are both on top form this should be an amazing contest. Serena Williams having amassed 5 Wimbledon Ladies Singles titles stretching back to 2002 with her most recent in 2012 must go into the match as favorite. Sharapova has won the Wimbledon Champion just once (in 2004) but as we all know is a gritty, never give up performer with great determination. World No.1 Williams however is back on top form after a dip in performance in 2013/2014 and is a formidably consistent performer with strong serving and penetrating ground shots. If she is on top form Williams should pull through to another Wimbledon Final.

The other Semi-final between 26 years old Agnieszka Radwanska and 21 years old Garbine Muguruza of Spain to be played as the first match on Centre Court on July 9 is experience against the up and coming youngster. Radwanska’s best performance in the Ladies Singles was reaching the final in 2012 only to be beaten by Serena Williams. But she knows what it is like to play a big match on Centre Court whereas it is new territory to Muguruza who has previously only reached the 2nd round in the Wimbledon Championships. This is an interesting contest of youth against experience.

The Federer – Murray match should be a cracker with steady baseline play by Murray against the skills and innovative style of Federer. This is a good chance for Federer on his favorite surface to push on towards his 8th Wimbledon title and his elusive 18th Grand Slam title. Age advantage and strong crowd backing will await Murray but Federer is also a favorite of the Wimbledon faithful so he will also get a good reception. Federer will be trying his utmost as it may be his last real chance of achieving this feat. The match is well balanced and could go either way.

The other Semi-final is between No.1 seed, Novak Djokovic and Richard Gasquet of France who came through against Stan Wawrinka in yesterday’s quarter final, a 5-set match which finished 11/9 in the 5th set. Gasquet’s best previous performance at Wimbledon was as Semi-finalist in 2007. He is up against the world No.1, a 2-times winner and defending Champion at the All England Lawn Tennis and Croquet Club (2011, 2014), with 41 tournament wins under his belt – a consistent match winner. Djokovic had a 6/4, 6/4, 6/4 Quarter Final win against Marin Cilic and is expected to move forward to another Final.