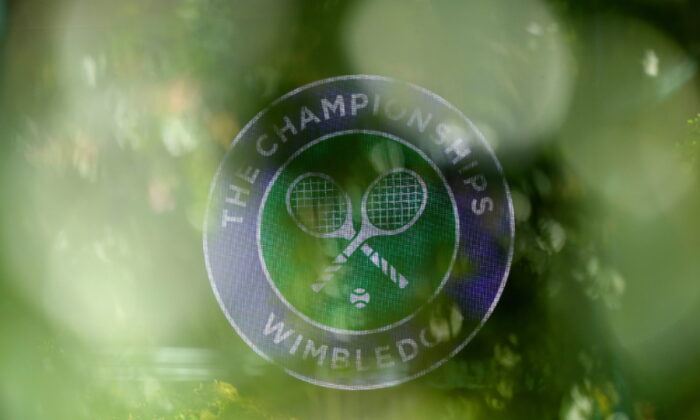 The organiser of the Wimbledon tennis championships has appealed after the Women’s Tennis Association (WTA) fined it for banning Russian and Belarusian players, the head of the All England Club said on Monday.

The club’s Chief Executive Sally Bolton confirmed the appeal on Monday and told reporters that the organisation stands by the ban and is “disappointed” by the international tennis bodies’ reactions to the ban.

The AELTC and Wimbledon’s management committee said on April 20 that it would decline entries from Russian and Belarusian players to the 2022 championship in light of Russia’s invasion of Ukraine. The decision also affected warm-up tournaments.

According to the Daily Mail, the AELTC was fined £207,000 ($251,000), while the Lawn Tennis Association (LTA)—the tennis governing body in Britain—received a fine of £620,000 ($752,000) for barring Russian and Belarusian players from Wimbledon’s warm-up tournaments in Eastbourne, Nottingham, and Birmingham.

‘We Stand by the Decision We Made’

Asked about the fines on Monday, Bolton started by saying she couldn’t comment “specifically on that” because of legal processes, but said the club is disappointed.

“We stand by the decision we made, we are deeply disappointed at the reactions of the tours to that decision and I probably can’t say anything more on that at this time, I’m afraid,” she said.

Bolton confirmed that the AELTC had appealed. She also said the club was waiting to hear from the Association of Tennis Professionals (ATP) on its decision on whether or not to fine the championships over the ban.

She later said it was “an incredibly difficult and challenging decision” to ban Russian and Belarusian players from the tournament, but that it was “the only viable option.”

“It was not one we took lightly. We thought carefully about the ramifications of taking it,” Bolton said. “But it was absolutely the right decision for us. It was the only viable option in the context of the government guidance in place and we stand by that decision.”

“We accept that others will take a different view but we absolutely stand by that decision,” she added.

The Daily Mail report on Sunday said the LTA was also set to appeal. The LTA declined The Epoch Times’ request for comment.

Wimbledon ‘Should Be Praised’

British Culture Secretary Nadine Dorries told the publication that the two organisers “should be praised” for banning Russian and Belarusian players.

“Since February the vast majority of the international sporting community have come together in solidarity to condemn [Russian President Vladimir] Putin’s barbaric actions in Ukraine,” she said.

“Regrettably the international tennis federations appear determined to be outcasts in this. The LTA and Wimbledon should be praised for their move to make Russia an international sporting pariah, and doing what is right in the current circumstances.”

Earlier this year, both the WTA and ATP criticised Wimbledon’s decision to ban Russian and Belarusian players.

They held meetings in Madrid in April to decide how to react.

The ATP, WTA, and International Tennis Federation all announced in May that the governing bodies will not award ranking points for the upcoming Wimbledon Championships in response to the ban.