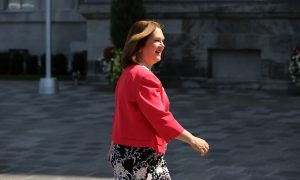 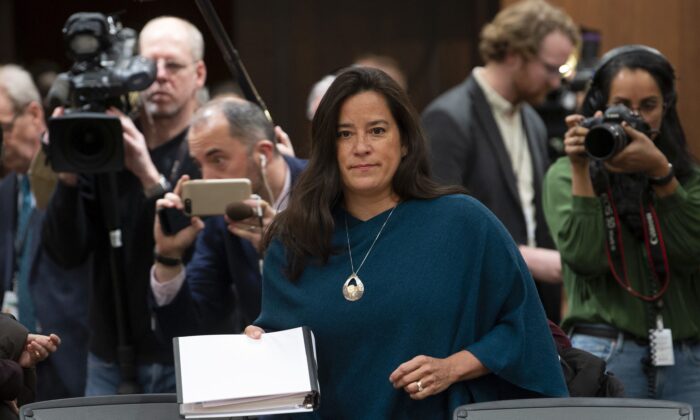 Cameras follow Jody Wilson-Raybould as she waits to testify before the House justice committee about allegations that the Prime Minister’s Office pressured her to intervene in a criminal prosecution against SNC-Lavalin during her tenure as attorney general, on Feb. 27, 2019. (The Canadian Press/Adrian Wyld)
Viewpoints

If Justin Trudeau weren’t cloaked in the magic and mystery of the Trudeau name, would he still be running for Parliament—let alone prime minister—after the accounting of him in Jody Wilson-Raybould’s new book?

It’s both a fair question and one with no quantifiable answer. However, Canadians vote on Sept. 20, and whichever configuration of majority or minority government they choose, there will obviously be no ready way to verify the impact of Wilson-Raybould’s “‘Indian’ in the Cabinet: Speaking Truth to Power.”

But juxtapose the former Liberal attorney general’s recollection of fighting for her political life during the SNC-Lavalin scandal against the legacy of the #MeToo movement from four years ago. It then becomes almost axiomatic that someone outside the Trudeau dynastic fold would not have survived politically for even a few hours after this week’s publication of the book itself, or the excerpt of it in the Sept. 11 Globe and Mail.

Put it another way. The 1990 biographers of Trudeau the Father coined the phrase “he haunts us still” to describe his political legacy. If Trudeau the Son forms a majority next week, will some clever wordsmith be able to resist writing “he flaunts it still?”

What Justin Trudeau flaunted, at least as Wilson-Raybould depicts it in her case, is male power over a female subordinate entirely reliant on his good graces to sustain a position and career for which she has sacrificed a great deal and invested enormous hope. Fighting back against that deep, dark male urge to control, to silence, was the essence of #MeToo. From it came the insistence that “women must be believed.” It closed the perpetual he said/she said escape hatch.

How ironic, then, that the media’s reporting of her book has reduced Wilson-Raybould’s revelations to classic he said/she said terms. She says Trudeau wanted her to lie and say that no pressure had been applied to her during the SNC-Lavalin debacle. He insists he never asked her to prevaricate. Her word against his. What ya gonna do?

Yet almost everyone with experience of leveraged power imbalances will find themselves nodding in recognition as they read her account. Some may well put their hands to their faces and murmur: “Oh my gosh, that’s what happened to me.”

Wilson-Raybould’s allegation about being pressured to lie forms the denouement of her story. But her slow build getting there is the true payoff for the way it reveals, through her eyes, the character, instincts, and impulses of our prime minister for the past six years—and possibly another five.

Some might dismiss those revelations as being merely Wilson-Raybould’s perceptions. But what happens, then, to “women must be believed?” And how do we get past Wilson-Raybould’s lawyerly renown for meticulously documenting circumstances. It’s a trait she publicly demonstrated with the note-taking and audio recordings presented during the Commons committee hearing on SNC-Lavalin.

In the case at hand, she finds herself summoned, while out for dinner with her family, to a 7:30 p.m. meeting, alone, in Trudeau’s Vancouver hotel room to discuss the SNC-Lavalin contretemps. Before the meeting starts, he gives her a tour of the top-floor suite, during which he happens to mention that the hotel belongs to a friend of his. Read the invisible ink: “I’m a trust fund kid from Westmount with a historic last name. I run the country. You’re the indigenous girl from Cape Mudge. I allow you to work for me.”

There’s a bizarre vignette during the tour where he mock attacks a “weird statue” that turns out to be made of rubber. Or maybe not so bizarre. Remember this is a prime minister who confessed to Rolling Stone magazine in 2017 that he and his Liberal party sidekicks trolled for a “good foil, and stumbled upon the scrappy tough-guy senator from an Indigenous community” to beat up in a charity boxing match.

The reference, of course, was to then-senator Patrick Brazeau, whose whupping was plotted theatre to vault Justin from acting teacher underdog to power status worthy of the Trudeau name. Imagine you’re an indigenous woman, alone in a room with that guy. That guy who holds your entire political future in his hands.

Wilson-Raybould got the message. But she also had one to deliver: She wasn’t backing down. She wanted him, there is no other phrase for it, to come clean. The passage becomes a textbook depiction of power abuse behaviour.

“I could feel the conversation beginning to turn. It was going to get personal. He asked if I trusted him. … I could see the agitation building. … His mood was shifting. I remember seeing it. I remember feeling it,” she writes.

And then this: “I cut him off and countered: ‘Don’t blame me. This is not my fault.’ I felt him turning on me even more—I could see it in his face, his eyes, and in his mannerisms—because he wasn’t getting his way.”

Non-partisan thought experiment: Ask yourself if you can sleep comfortably at night knowing that man is asking you to let him run your country. Now try it again imaging his name is Hossenfeffer, not Trudeau.

Peter Stockland
Follow
Peter Stockland is a former editor-in-chief of the Montreal Gazette and co-founder of Convivium magazine under the auspices of the think tank Cardus. He is also head of strategic communications for Ottawa’s Acacia Law Group.
TOP NEWS