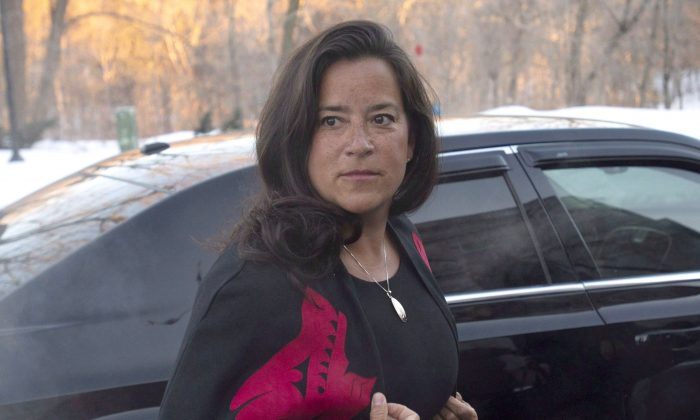 Jody Wilson-Raybould arrives at Rideau Hall in Ottawa on Jan. 14, 2019, as the governing Liberals shuffle their cabinet. The shuffle saw Wilson-Raybould moved from justice minister to Veteran’s Affairs. She resigned from cabinet on Feb. 12. (Adrian Wyld/The Canadian Press)
Canada

OTTAWA—Former cabinet minister Jody Wilson-Raybould says she’s still talking to her lawyer about what she can and can’t say publicly about allegations she was pressured to avert a criminal trial for Quebec engineering giant SNC-Lavalin.

Wilson-Raybould made the remarks on Feb. 19 as she exited the suite of offices in Parliament’s West Block that hold both the cabinet room and the Prime Minister’s Office, just as a cabinet meeting was breaking for the day.

Jody Wilson-Raybould speaks to cabinet, will be invited to speak at committee https://t.co/Mr3yWn1kbu #cdnpoli pic.twitter.com/oQLhIKkalr

Prime Minister Justin Trudeau said on his way into the House of Commons that she had asked to speak to cabinet, but he would not say what they discussed and stressed all cabinet conversations are confidential.

Wilson-Raybould resigned as veterans-affairs minister a week ago. Her resignation came several days after anonymous allegations were made to the Globe and Mail newspaper that the Prime Minister’s Office had tried to convince her to allow SNC-Lavalin to negotiate a remediation agreement as a way to avoid the company’s criminal prosecution.

The implication was that her refusal to agree led to her January demotion from the more-senior justice portfolio to veterans affairs.

On Tuesday, however, she said she was still a member of the Liberal caucus.

“I am still consulting with my legal counsel, as I think people can appreciate, or should appreciate, the rules and laws around privilege, around confidentiality, around my responsibility as a member of Parliament,” she said.

“My ethical and professional responsibilities as a lawyer are layered and incredibly complicated so I am still working with my lawyer.”

Trudeau has acknowledged there were conversations with her about the case, but that he told her the decision was hers to make, and she was not being directed to do anything.

On Monday, the controversy led to the resignation of Trudeau’s principal secretary, Gerald Butts. Butts denied he had done anything wrong but said he had become a distraction for the government so he was stepping aside.

Wilson-Raybould has hired former Supreme Court justice Thomas Cromwell to advise her about what solicitor-client privilege can allow her to say.

Cabinet met Tuesday for the first time since the allegations broke.

The House of Commons justice committee agreed last week to study the affair, but the Liberal-dominated committee initially declined to invite Wilson-Raybould to appear.

However, shortly after Tuesday’s cabinet meeting committee member and Liberal MP Iqra Khalid tweeted that she will ask the committee to invite Wilson-Raybould to testify.

MPs spent the morning debating an NDP motion calling for Trudeau to waive solicitor-client privilege to allow Wilson-Raybould to speak freely about what happened, and to call a public inquiry to get to the bottom of the matter.