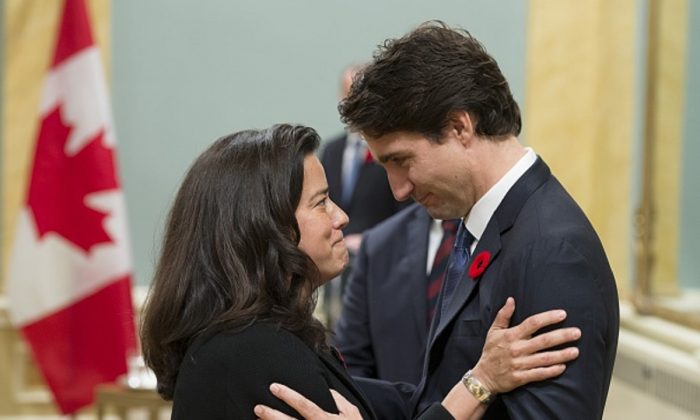 Wilson-Raybould Scheduled to Give Testimony on SNC-Lavalin Affair

OTTAWA—Jody Wilson-Raybould has been asked to appear at the House of Commons justice committee on Feb. 26.

On Monday, Prime Minister Justin Trudeau lifted the solicitor-client privilege and cabinet confidentiality provisions keeping his former attorney from telling her side of the SNC-Lavalin prosecution story.

Following a justice committee meeting this morning, Wilson-Raybould was asked to appear at 3:15 p.m. on Wednesday, where she will be given her requested 30-minute opening statement before taking questions.

Wilson-Raybould hasn’t yet confirmed the time. In a letter to the committee Monday, she said she was “anxious” to appear, but was waiting for full clarity on what she could and couldn’t say.

That seems to be settled now after an order-in-council published late Monday lifted the protections on all her conversations about SNC-Lavalin other than those she had with the director of public prosecutions.

“It is important that people get an opportunity to testify or share their point of view with the committee,” he said.

“As we said, waiving privilege, waiving cabinet confidentiality is something that we had to take very seriously, but I’m pleased that Ms. Wilson-Raybould is going to be able to share her perspective.”

It has been nearly three weeks since anonymous allegations were made that Wilson-Raybould was pressured by the Prime Minister’s Office to negotiate a remediation agreement with Quebec’s SNC-Lavalin, rather than pursue a criminal prosecution for bribery and fraud.

The public prosecutor, Kathleen Roussel, decided in September not to allow SNC-Lavalin to take advantage of a change to the criminal code introducing remediation agreements, but as attorney general Wilson-Raybould could have overridden that decision.

The agreements allow companies to avoid criminal prosecution if they admit wrongdoing, pay fines and restitution and plan to prevent future bad behaviour.

The goal is to protect the employees and innocent clients or customers of a corporation from being negatively impacted if a company is convicted of an economic crime like bribery and fraud. If SNC-Lavalin is convicted, it could be barred from bidding on government contracts for up to a decade, which could cripple the company financially.

Trudeau and Wilson-Raybould were awaiting legal advice on the extent of solicitor-client privilege protecting their conversations.

Justice Minister David Lametti, who was advising Trudeau on the matter of privilege, says his office had contact with Wilson-Raybould’s legal team on the matter, but would give no details about those conversations.

“What we were doing is establishing a process that’s fair and open and allows transparency, but still protects the very principles that we want to protect in the legal system as well as not interfering with ongoing litigation,” he said.

Keeping the conversations with Roussel private protects information that could affect the ongoing criminal case against SNC-Lavalin over allegations they bribed Libyan officials to secure contracts there. There is also a legal challenge by SNC-Lavalin seeking a judicial review of Roussel’s decision not to pursue a remediation agreement.

Under a little known rule known as the Shawcross Doctrine, the attorney general can be provided with information to give context to a decision about prosecutions, but they cannot be told what to do, nor can they ask to be told what to do.

The question is whether Trudeau and other members of his office pressured Wilson-Raybould to make a decision during numerous conversations.

Trudeau has insisted he was always clear the decision whether to prosecute was Wilson-Raybould’s alone.

Wilson-Raybould was shuffled to veterans affairs from justice in mid-January, and then resigned from cabinet a few days after the allegations were made public. She remains a Liberal MP and has said she intends to run as a Liberal in this fall’s election.