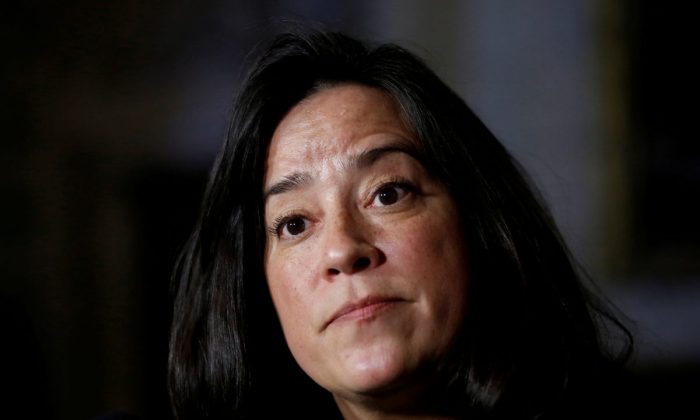 Wilson-Raybould Says She Was Pushed, Got Veiled Threats on SNC Lavalin

Testifying to the House of Commons justice committee, Wilson-Raybould says Prime Minister Justin Trudeau and others repeatedly brought up the risks to the company if it were convicted of corruption and fraud in relation to work it sought in Libya.

She says a provincial election in Quebec was a major concern for the Liberal government.

Wilson-Raybould was shuffled out of the justice portfolio in January and resigned from cabinet earlier this month, after a story broke that she had been pressured inappropriately to arrange a “remediation agreement” that would have headed off the prosecution.

In her testimony, Wilson-Raybould says the decision not to pursue such an agreement was made in September, but she and her staff heard repeatedly from Trudeau’s office and Finance Minister Bill Morneau’s office after that, trying to find ways to help SNC-Lavalin.

She says she was told repeatedly the decision was up to her, but attempts to talk her into a remediation agreement were relentless.

A Chronology of Events in The SNC-Lavalin Controversy:

Feb. 19, 2015: The RCMP lays corruption and fraud charges against Montreal-based engineering and construction firm SNC-Lavalin, over allegations it used bribery to get government business in Libya. SNC-Lavalin says the charges are without merit and stem from “alleged reprehensible deeds by former employees who left the company long ago.” A conviction could bar the company from bidding on Canadian government business, potentially devastating it.

Oct. 19, 2015: The Liberals win a federal election, taking power from the Conservatives. Two weeks later, Prime Minister Justin Trudeau names Jody Wilson-Raybould minister of justice and attorney general of Canada. She is the first Indigenous person to hold the post, which combines duties as a politician (heading the Department of Justice) and a legal official (overseeing prosecutions).

March 27, 2018: The Liberals table a budget bill that includes a change to the Criminal Code allowing “remediation agreements,” plea-bargain-like deals between prosecutors and accused corporations in which they can avoid criminal proceedings by making reparations for previous bad behaviour. SNC-Lavalin had lobbied for such a provision in Canadian law.

Spring, 2018: Although the bill has yet to pass, SNC-Lavalin contacts Public Prosecution Service lawyers to ensure they have all relevant information for a possible invitation to negotiate a remediation agreement. During the next three months, in response to requests from prosecutors, SNC-Lavalin provides detailed information it sees as making a strong case for an agreement.

Sept. 4, 2018: The prosecution service tells SNC-Lavalin it will not invite the firm to negotiate a remediation agreement.

Sept. 17, 2018:  Trudeau and Wilson-Raybould discuss the SNC-Lavalin file. As attorney general, Wilson-Raybould could overrule the prosecution service, directing it to negotiate an agreement with the company. (Trudeau later says Wilson-Raybould asked him if he planned to tell her what to do concerning the prosecution—a conversation that he says ended with him telling her any decision was hers alone.)

Oct. 9, 2018: The prosecution service confirms in writing it will not invite SNC-Lavalin to negotiate a remediation agreement, a decision the company challenges in Federal Court. That challenge is ongoing.

Oct. 10, 2018: SNC-Lavalin issues a news release saying it strongly disagrees with the director of prosecutions’ position and remains open and committed to negotiating a remediation agreement. SNC-Lavalin shares fall nearly 14 per cent, closing at $44.86 on the Toronto Stock Exchange. That’s the lowest close since March 2, 2016.

Oct. 11, 2018: SNC-Lavalin meets with Elder Marques, a senior adviser in the Prime Minister’s Office, to discuss “justice and law enforcement.”

Nov. 5 and 19, 2018: SNC-Lavalin meets with Mathieu Bouchard, another senior adviser in the Prime Minister’s Office, to discuss “justice and law enforcement.”

December, 2018: According to the Prime Minister’s Office, Wilson-Raybould raises the remediation case with Gerald Butts, the prime minister’s principal secretary, and he tells her to talk to Wernick, the Privy Council clerk.

Jan. 14, 2019: Trudeau shuffles his cabinet after the resignation of Treasury Board president Scott Brison. Wilson-Raybould is moved from Justice to Veterans Affairs, widely seen as a demotion. David Lametti, a Montreal MP and former law professor, becomes justice minister. Wilson-Raybould posts a long letter outlining her record as justice minister and noting a great deal of work remains to be done toward reconciliation with Indigenous Peoples.

Feb. 7, 2019: Citing unnamed sources, the Globe and Mail newspaper reports that Trudeau’s aides attempted to press Wilson-Raybould, while attorney general, to intervene in the prosecution of SNC-Lavalin, and that exasperation with her lack of co-operation was one reason for shuffling her out of the justice portfolio. Trudeau denies any impropriety. Wilson-Raybould says solicitor-client privilege prevents her from speaking about dealings she had on the case while attorney general.

Feb. 11, 2019: Ethics commissioner Mario Dion says he’s beginning an investigation. Trudeau says he’s spoken to Wilson-Raybould and confirmed with her that he said any decision on the SNC-Lavalin prosecution was entirely hers. Her continued presence in his cabinet speaks for itself, he says.

Feb. 12, 2019: Wilson-Raybould resigns as veterans-affairs minister and says she’s hired former Supreme Court justice Thomas Cromwell to advise her on the limits of solicitor-client privilege. Trudeau says he’s surprised and disappointed that Wilson-Raybould has quit, and that if she felt undue pressure in her role as attorney general, she had a duty to report it to him.

Feb. 13, 2019: The House of Commons justice committee debates its own probe of the issue. Liberals use their majority on the committee to call one closed-door meeting and hear from senior officials (Lametti as justice minister, the top bureaucrat in his department, and the Privy Council clerk) who can talk about the tension between the minister of justice’s duties as a politician and his or her responsibilities as attorney general of Canada. The Liberals say this is a first step in a cautious investigation, but the opposition calls it a coverup.

Feb. 15, 2019: Trudeau says Wilson-Raybould asked him in September whether he would direct her one way or another on the SNC-Lavalin question. He says he told her he would not.

Feb. 18, 2019: Butts resigns as Trudeau’s principal secretary. He denies any impropriety but says his presence in the Prime Minister’s Office has become a distraction.

Feb. 19, 2019: Wilson-Raybould stuns observers by attending a meeting of the very cabinet from which she had resigned a week earlier. Trudeau says she had asked to speak there and was invited to do so but cabinet confidentiality means nothing can be revealed about why or what was said. After the meeting, Wilson-Raybould says she is still talking to her lawyer about what she can and can’t say publicly.

Feb. 20, 2019: Trudeau says that while an airing of the facts is needed, he is confident the examinations underway by the ethics commissioner and the justice committee will provide it. The Liberals use their House of Commons majority to defeat an opposition motion calling for a public inquiry into allegations the Prime Minister’s Office pressured Wilson-Raybould.

Feb. 21, 2019: Wernick launches a vigorous defence of the government’s handling of the criminal prosecution of SNC-Lavalin, bluntly declaring allegations of political interference to be false and even defamatory. The Privy Council clerk also challenges Wilson-Raybould’s assertion that solicitor-client privilege prevents her from responding to allegations.

Feb. 25, 2019: Trudeau partly waives both solicitor-client privilege and cabinet confidentiality for his former attorney general, paving the way for Wilson-Raybould to tell her side of the SNC-Lavalin saga to the justice committee and ethics commissioner. The order specifically notes, however, that she cannot speak publicly about communication she had with Kathleen Roussel, the director of public prosecutions.