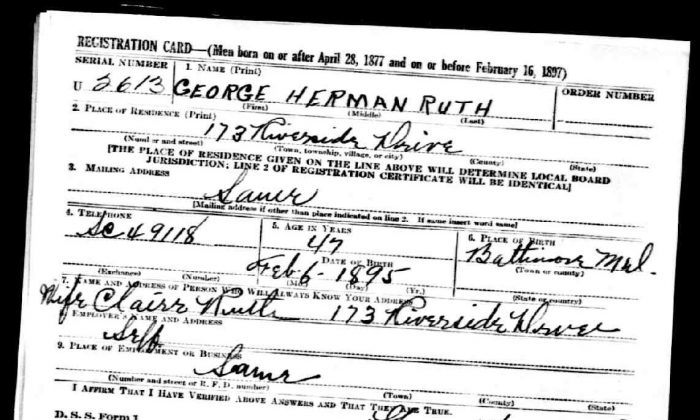 (Courtesy of Ancestry.com)
US

BOSTON—Paul Revere left all his household furniture to an unmarried daughter.

Harriet Beecher Stowe bequeathed her stock in several railroads and a Florida orange grove to her son.

Daniel Webster willed a beloved grandson a gold snuff box with the head of George Washington on it and all his fishing tackle.

Such mundane details that shed fascinating insights into the family relationships of some of America’s most famous citizens are now just a mouse click away thanks to Ancestry.com, which has digitized the wills and probate records of about 100 million Americans dating from the Colonial era to the beginning of the 21st century.

Most Americans know the grand narrative of the nation’s most famous historical figures, but the new trove of records contains information not found in most history books.

It’s also an invaluable resource for ordinary Americans digging into their roots. Looking at a will is like pulling a thread on family history. Wealth, possessions, family relationships can be followed down the generations.

“What you find in probate records and wills are the rich stories about what mattered enough to pass down and a wealth of information about family history,” said Jennifer Utley, senior manager of research at Ancestry.com’s Utah headquarters.

“They paint a more beautiful picture of people’s lives.”

Every American elementary school student learns about Revere’s 1775 ride to warn about British troop movements, and his career as a master metal worker, but his will reveals some interesting facts — not just about his relationship with his daughter — but about his relationships with his grandchildren, Utley said. They all got $500 in his will, except for one, “who shall have no part of my estate” except for $1, the will says. Exactly what that grandchild did to deserve his famous grandfather’s snub isn’t explained, Utley said, but the will offers clues into Revere’s thinking.

“These are details you just cannot find anywhere else,” she said.

The information has for centuries been hidden in dusty basements and storage areas in courthouses across the country. Ancestry.com’s three-year digitization project brings it all together in one place for the first time.

The massive collection of information is a gold mine for historians and genealogists, both professional and amateur.

“This is an extraordinary resource for all researchers,” said Laura Lovett, an associate professor of U.S. history at the University of Massachusetts at Amherst who specializes in the history of women, childhood and the family, and is an ancestry.com subscriber.

“A will allows us to really look at their daily life: What did they possess? What did they value? What’s important enough to write down?” she said. “They let us understand the material life across the centuries. It allows us to tell history from the bottom up.”

In some cases, a will may be the only written evidence that someone even existed, Lovett said.

People researching family history often look to marriage certificates, birth certificates and census information, said Ruy Cardoso, a Massachusetts-based certified genealogist. But those records aren’t as detailed as wills, and haven’t been kept for as long.

How Much Did Our Ancestors Drink—Are We Drinking More?

“Wills can give a lot more insight into their lives and thoughts as well as the times and places where they lived,” he said. “They contain the language of the day, weird bits of terminology, words we don’t use today.”

The information is available to the public starting Wednesday.

“People are going to get lost in this collection,” Ancestry.com’s Utley said.