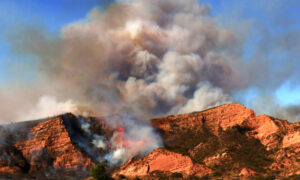 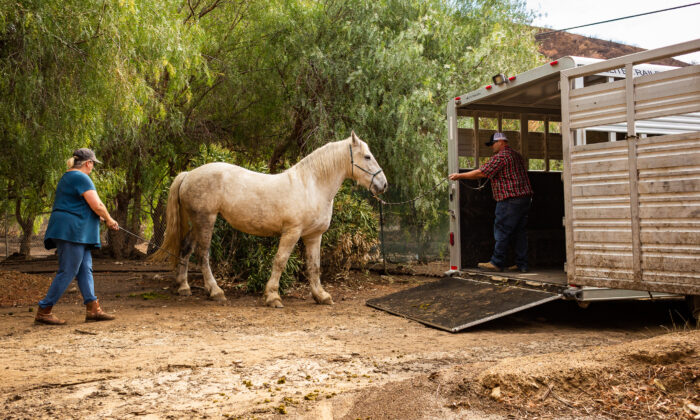 Residents of Williams Canyon are preparing to evacuate their community as potential mudslides caused by fierce rains threaten to destroy their homes and livestock in rural Orange County, California.

At noon on Jan. 28, Orange County Sheriff’s Department deputies drove through the canyon, urging residents to leave the area and blasting warnings of a “voluntary evacuation” over loudspeakers.

“We cannot wait until after the rain comes to get horses out or to get people out. We’ve got to get out now,” Susan Iwamoto, 56, told The Epoch Times. “We’re just trying to salvage what we can.”

On the afternoon of Jan. 28, Iwamoto said she and her husband, Wayne, 69, were in a “race against time” to save their horses, which were still traumatized from previous evacuations during the Bond Fire in December.

“We are actually hiring a transport,” she said, as the couple loaded six horses into trailers. “We’re just paying somebody to get them all out at once, rather than making multiple trips down to Riverside with our horses. … We literally have to use every minute we have to get ourselves out of here.”

Iwamoto’s home, along with much of the canyon community, was damaged by the early December fire. The blaze destroyed vegetation, making the soil less stable, and susceptible to mud flows and flooding.

“We’ve literally been living in ash and soot since Dec. 2,” Iwamoto said. “We have an orchard that burned. There were about 60 trees here, and all of it burned.”

Sandi Dunn, 76, a neighbor, said she would likely heed the voluntary evacuation order.

“It’s a good thing we have good neighbors to help each other out back here,” she said. “I have no idea if all this mud is just going to fill up my house or not. I don’t know.”

Dunn’s son, Dane, of Coto de Caza, was at her home to help. “It’s crazy. The county won’t even do anything. I had to rent a tractor just so my mom could get out of her own driveway,” he said.

Her other son, Morgan, lost his home in the December blaze.

Resident Pat Ogle operated a front-end loader tractor to clear mud and debris away from homes.

“You have no way of knowing when the alerts are on out here,” Ogle said. “Last time, during the fires, they turned the power off, making things a lot more difficult.”

Orange County Supervisor Don Wagner told The Epoch Times on Jan. 28 that the county has been working to clear debris and has placed dumpsters in the canyons to help residents clear drainage areas.

“We realize that there are threats to the canyons and have been working for the last several months with canyon representatives of the canyon residents to clear debris, clear mud and culverts, and to get remedial supplies, like sandbags and wheat bales out there,” he said. “We’ve been working very hard to protect them.”

She said that in addition to Williams Canyon, both Wildcat Canyon and an area known as “cabin land” are also facing extreme threats from mudslides.

Hubble said some high-risk areas are expecting about two inches of rain in a 12-hour window, between 4 a.m. and 4 p.m. on Jan. 29. She added that residents should be ready to evacuate at a moment’s notice, possibly in the middle of the night.

“People have boarded up windows and sandbagged around the base of their homes,” she said.

According to Hubble, the county has supplied 12,000 sandbags for protection, while the Inter-Canyon League, which she chairs, has donated about 500 wheat bales. The league has also trucked in other erosion-control equipment to help protect people and homes from debris flows.

Iwamoto is grateful for the sandbags, but said many have already been washed into the creek beds. She said more could have been done to protect homes and property, and expressed frustration that the Large Animal Rescue Team (LART) had not been activated.

Hubble said LART is only activated once an emergency has been declared by the EOC and mandatory evacuations have been ordered.

She said on Jan. 27 that she’d already had requests “for the LART folks to come out and get animals.”

“I’m working on a list of equestrian centers that can take the animals for a few days that are local, without having to transport them down to a place like Los Alamitos or a place like Orange County Fairgrounds, which is what we had to do last time, when we had the Bond Fire,” she said.

On Jan. 28, Orange County Animal Care issued a press release advising residents of Williams, Silverado, and Modjeska canyons to “move their pets before the rainfall arrives this evening.” The release stated that the U.S. Geological Survey had warned of “flash flood level rain … capable of producing catastrophic debris flows.”

Hubble, who has lived in the canyon for more than 40 years, said she has been working with the Irvine Ranch Water District to repair the road that leads in and out of Williams Canyon. “It is one way in and one way out, and a lot of the road is already damaged,” she said, citing a previous flood in 2010 following another wildfire.

A Jan. 28 federal Watershed Emergency Response Team (WERT) report on the Bond Fire stated that “emergency planning, along with a clear understanding of the likely hazards, is critical if deaths, injuries, and/or property damage are to be avoided or minimized during future rain events.”

The Bond Fire started on Dec. 2 in Silverado Canyon and burned  6,681 acres (10.4 square miles). A total of 32 structures were destroyed, and another 21 damaged. The fire burned areas east of Irvine and Tustin, along the northwestern foothills and slopes of the Santa Ana Mountains, before being contained on Dec. 20.