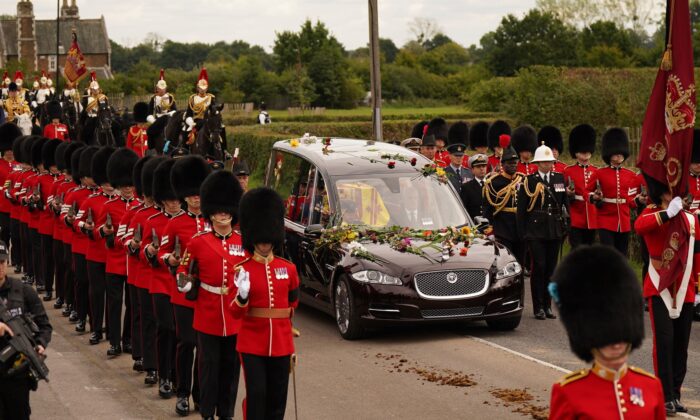 The hearse carrying the coffin of Queen Elizabeth II makes its journey from Westminster Abbey in London to St George's Chapel at Windsor Castle in Berkshire, England, on Sept. 19, 2022. (Niall Carson/Pool Photo via AP)
Viewpoints

William Brooks: On the Passing of Elizabeth II: Can the Anglo-American Legacy Be Restored?

North Americans of my generation inherited a world of relative peace and opportunity.

We received our good fortune through the toil, courage, and sacrifice of ancestors, grandparents, and parents who worked and served through centuries of pioneer settlement, World War I, the Great Depression, and World War II.

Despite a lingering Cold War with communism, we came of age trusting in the strength and fairness of free nations and the security of the North Atlantic Treaty Organization.

In the Atlantic Triangle we welcomed scores of people who had been displaced by political revolutions and bloody conflicts. Aspiring immigrant families from around the world flocked to the shores of the UK, USA, and Canada for lives they knew would be enriched by the survival of Anglo-American virtues.

We never thought that history could turn on a dime and that so much of what the British tradition stood for could be torn to pieces over a single lifetime.

In his latest book “Conservatism: A Rediscovery,” American-Israeli scholar Yoram Hazony argues that, over centuries, the democratic culture of Western nations has been positively influenced by the English conservative tradition.

Hazony defines a “conservative” as someone who “works to recover, restore, and build up the traditions of his forefathers and to pass them on to future generations.”

Political conservatives regard the recovery and renewal of national and religious traditions as a way of strengthening a country over time. That’s why common men and women relate naturally to work, faith, family, and the task of national renewal.

In contrast, political progressives contrive utopian blueprints for everyone at any time and place in history. “The liberal paradigm is blind to the nation,” Hazony writes. “Nothing like the nation is to be found in the premises of Enlightenment liberal political theory.”

Globalists view the nation as little more than a label given to an amorphous mass of self-interested individuals that consent to be governed within a designated territory. Any celebration of national heritage is regarded as a bull-headed obstacle to the inevitable development of multi-cultural states.

Loyal citizens in the UK, USA, and Canada are seeking to restore the cohesion of families, clans, tribes, diverse settlers, freed slaves, and immigrants who came together to form free nations over centuries of Anglo-American history.

Only our deracinated and self-interested global elites desire the kind of “post-national state” favored by Canadian Prime Minister Justin Trudeau.

A Worthy Procession of Anglo Icons

Legions of people endured up to 20 hours in line to pay their respects to the deceased Queen Elizabeth II. Mourners sensed that Elizabeth was part of a worthy procession of Anglo icons that hark back to the ninth-century reign of Alfred the Great.

King Alfred’s courage and religious devotion prevented England from being overwhelmed by pagan invaders. Alfred promoted Christianity, unity, due process of law, classical learning, and military strength. In the 11th century, Cnut the Great and William the Conqueror led successful invasions of England, but the integrated Christian order established by Alfred survived the conquests and assimilated the conquerors.

Edward I (1272–1307) was criticized for his brutal treatment of the Scots, but was credited with recognizing the authority of Parliament. Henry V (1386–1482) was celebrated by William Shakespeare as the battlefield commander who led his men “once more into the breach.” Henry VIII (1509–1547) is most remembered for separating the Church of England from the Rome and creating a sovereign English nation.

Elizabeth I (1558–1603) defeated the Spanish Armada and reigned over a golden age for art and science. James I (1603–1625) supported increased trade and influence in the Americas. After Cromwell’s short-lived republic, Charles II (1630–1685) restored the Stuart dynasty and ensured the survival of the British monarchy. William III and Mary (1689–1702) deposed James II for his absolutist preferences and ultimately planted the seeds for a political democracy.

In denying the principle of “no taxation without representation” to subjects settled outside Great Britain, George III (1760–1820) lost the American colonies. But by passing the American Constitution of 1887, the Federalist Party and President George Washington assured that Anglo traditions of national cohesion and democratic governance would carry on in the United States of America.

Queen Victoria (1837–1901) defined her reign with strict standards of Christian morality and dedication to the English-speaking peoples. Elizabeth II (1952–2022) was the equal of Victoria in personal virtue and affection for her people around the world.

In the modern era, Anglo-American political giants like Sir Winston Churchill, John F. Kennedy, Margaret Thatcher, Ronald Reagan, Stephen Harper, and Donald Trump stood out as leaders who sought to restore the greatness of their nations.

Restoration Requires a Will to ‘Carry On’

In the twilight of her life, an astute woman like Elizabeth II must have entertained some curious thoughts about the era of her reign. Throughout her life scores of deceitful intellectuals have cheered on the demise of all she stood for: faith, marriage, family, loyalty, impartial justice, duty, and national sovereignty.

The conduct of Anglo-Americans has too often fallen short of our historic religious ideals, but as Queen Elizabeth is laid to rest, it is important to recall that the civil foundations of “British particularism” and “American exceptionalism” were created by 17th-century Englishmen who stumbled upon the worthy idea that government should serve the people and be subject to the law.

Despite constant recriminations from the left, it is now clear that, given time, Anglo-American culture improved the lives of almost everyone it touched. Within the orbit of its influence, men and women live longer, eat better, enjoy more freedom, and have access to personal possessions and privileges that were once reserved for only the rich and powerful.

The pomp and ceremony of Elizabeth’s funeral has touched countless hearts. Even those who have never shared the Queen’s deep Christian faith can’t help feeling moved by the sacred and divine nature of her leadership.

We will pray that our recollections of Her Esteemed Majesty and the pageantry of her funeral celebration might help restore the waning sense of moral virtue and national pride that has been sadly missing over recent decades.

Let us hope that even in her death, Elizabeth has given Anglo-American patriots the will to carry on.