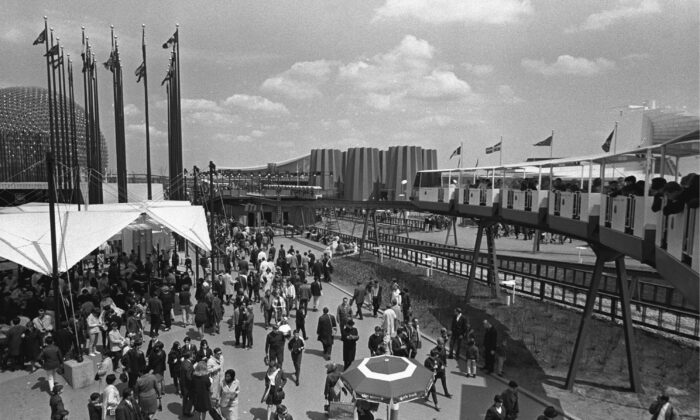 Crowds at the Expo 67 World’s Fair in Montreal on May 22, 1967. Although Expo 67 was the main centennial year celebration, events to commemorate Canada’s achievements, history, and cultural heritage were held across the country to mark the 100th anniversary of Confederation. (CP Photo)
Viewpoints

In the year 1967, Canada celebrated its 100th birthday. At the time, little dampened the spirit of citizens who turned out to commemorate a century of Confederation.

Native-born Canadians took pride in remembering their country’s history and traditions. New Canadians openly acknowledged the merits of the democratic nation they had chosen to join.

More recently, among our best-schooled intelligentsia, expressing feelings of national pride has become much less fashionable. There is scant  tolerance for those who look back favourably on epic tales of explorers, pioneers, sailors, soldiers, settlers, priests, farmers, workers, entrepreneurs, and political leaders who contributed to the founding of the Dominion of Canada on July 1, 1867.

Canada Day fireworks no longer shine light on national affections. They blow them up! The nation’s past has been “deconstructed” and judged by more “progressive” minds to be tragically flawed and systemically racist. We are said to have an “exploitative colonial history” unworthy of preservation.

Anti-Nationalism and the Left

The left contended that global problems like climate change, inequity, migration, racism, and poverty called for “borderless” solutions. As a result, a “one-world government” paradigm came to occupy the centre of academic thought. Universities in North America and Europe routinely advertise for positions in “global governance,” a term that few would have recognized even a decade ago.

By and large, Canadian elites became predisposed to renounce the idea of nationhood. In 2015, Prime Minister Justin Trudeau articulated this when he told the New York Times Magazine that Canada could be “the first post-national state.” “There is no core identity, no mainstream in Canada,” said our prime minister.

Charles Foran, a prominent member of Canada’s Laurentian literary elite, agreed entirely. Writing in The Guardian he said: “First and foremost, post-nationalism is a frame to understand our ongoing experiment in filling a vast yet unified geographic space with the diversity of the world.”

More recently, Canada’s long-standing partners in the North Atlantic Triangle have begun to resist the ascendency of anti-nationalist globalism.

Common men and women in the UK and America have rediscovered the traditional spirit of nationhood. Britain’s vote to leave the European Union and the rise of the “MAGA” movement in the USA heralded a return to a more patriotic stage in the history of our founding peoples.

Early in the cold, pandemic-afflicted winter of 2022, a nationalist spirit also emerged in Canada. Truckers from across the country launched a series of protests against draconian vaccine mandates and restrictions that were putting thousands of them out of work. Somehow, this “Freedom Convoy” produced national emotions that Canadians had been suppressing for decades.

Hundreds of vehicles formed convoys, rolled though the provinces, and converged for a rally in Ottawa on Jan. 29. The convoys were joined by legions of citizens who disregarded the ideologically prescribed “diversity” imperatives that have been pushing Canadians apart.

The truckers and their supporters were mostly working- and middle-class Canadians. They raised the flag, sang “O Canada,” and gave citizens a renewed sense of solidarity.

More imaginative political leaders might have spoken with the truckers and seized the opportunity to bring the nation together. Instead, the Ottawa protesters were vilified by the regime media, harassed by Ottawa police, and finally crushed by a para-military-style “emergency measures” operation.

The Virtue of Nationalism

From Brexit and MAGA to the Canadian Freedom Convoy, recent events are forcing a crucial debate between proponents of global governance and supporters of independence and self-determination.

In his 2018 book “The Virtue of Nationalism,” Israeli scholar Yoram Hazony contends that a world of sovereign nations is the best option for those who care about personal and collective freedom.

Hazony points out that only decades ago, nationalism was routinely associated with broad-mindedness and generosity of spirit. Woodrow Wilson’s Fourteen Points along with Roosevelt and Churchill’s Atlantic Charter were seen as beacons of hope for mankind. “And this” he wrote, “precisely because they were considered expressions of nationalism, promising national independence and self-determination to enslaved peoples around the world.”

Canadian nationalism once flourished under leaders like Sir John A. Macdonald and Sir Wilfred Laurier. In other lands, nationalist leaders like Mahatma Ghandi won wide acclaim for steering their people toward sovereignty and freedom.

It is through these nationalist traditions, Hazony argues, that we can limit both internal tribal conflicts and foreign imperial dominance. Free nations allow human differences and innovation to thrive.

Make a Commitment to National Renewal

Our obsessive focus on “diversity” over “unity” has produced tragic levels of resentment, distrust, division, and anxiety. Post-nationalists, who support the vision of “diverse” tribal territories overseen by the genius of Beijing’s communist military empire, are destroying confidence in Canadian nationhood.

Canadians need to begin restoring common national bonds from the bottom up. Love of country is not some bizarre political pathology that grips people to no good end. Nationalists believe that the world is governed best when free and independent countries are permitted to cultivate their own traditions and pursue their own interests without interference from hostile ideological empires.

From a guy who was around to celebrate Canada’s 100th birthday in 1967, here are 10 potential commitments Canadians might consider on July 1, 2022. Epoch Times readers will certainly be able to come up with some of their own:

This year, Canadian truckers reminded us all that the power of the people is often more impressive than the people in power.