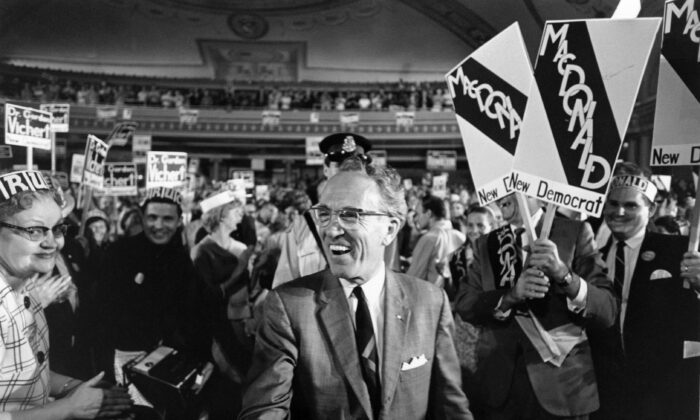 Tommy Douglas, known as the father of Medicare, receives a standing ovation while arriving at the Palace Theatre to address an NDP rally in Hamilton, Ont., on June 11, 1968. (The Canadian Press)
Viewpoints

For centuries health care was, for the most part, privately delivered by independent physicians. But during the West’s 20th-century collectivist moment, medical care became a common priority for reform by liberal and socialist governments.

One of the first models for modern health-care systems dates back to Otto von Bismarck’s compulsory health insurance, introduced in the German Empire in 1884. Britain’s National Insurance Act of 1911 was the first step toward universal health care within the British Empire.

Socialized medicine arrived in Canada in the wake of World War II. In 1947, the government of Saskatchewan introduced a province-wide universal hospital care plan and other provinces soon followed suit.

In 1966, over the objections of many practising physicians, the Canadian government passed the Medical Care Act. Within a short time, all the provinces and territories came under universal medical insurance plans.

In the late 1960s and ’70s this was seen to be one of the greatest blessings of our time. Today, the system is becoming increasingly regarded as an unsustainable curse.

Despite the promise of free universal care, Canadians have begun to ask: Why do so many citizens not have access to a family doctor? Why do aging Canadians wait so long for specialized care or necessary surgery? Why do we hear horror stories about hospital room shortages and hallway medicine, and why is the system constantly strapped for cash?

Canadians are never told how many of their tax dollars go to health care.

An Insightful Look at a Failing Vision

Dr. Whatley, a past president of the Ontario Medical Association, raises serious issues that trouble millions of Canadians. He contends that health care will not improve until we determine how and why the system fails so many patients.

The title of Whatley’s book is unambiguous: “When Politics Comes Before Patients: Why and How Canadian Medicare is Failing.” Why, he asks, are politicians and public opinion-makers trapped by a vision that does not produce what it promised but forbids criticism?

In the early stages of Medicare development, progressive academics and politicians wrongly presumed ordinary Canadians were being deprived of affordable medical care by greedy, profit-seeking doctors. Whatley asserts that the left viewed Medicare as another means of achieving social equity. For socialists, almost all supply difficulties are seen as market failure. Free care for all, they insisted, had to become part of Canada’s grand national vision.

Whatley examines the inevitable deficiencies in the socialist worldview that leads to the breakdown of universal care. Like most experiments in social engineering, he says the result is “inequity, less access, less efficiency, and more waste, including the waste of the motivation and talents of doctors and nurses.” The late John Robarts, premier of Ontario from 1961 to 1971, described the emerging system as “one of the greatest political frauds that has been perpetrated on the people of this country.”

In the salad days of Medicare, between 1968 and 1977, everything from trivial complaints to traumatic injury or disease was paid for with no questions asked. But, as Margaret Thatcher used to say, nanny state governments eventual run out of other people’s money. Today in Canada, centralized management, bureaucratic miscalculations, years of cutbacks, and political squabbling has left doctors and patients with little input into how health dollars are allocated and spent.

Citizens with treatable knee and hip conditions are being left to suffer for months, sometimes years. In some localities it can take up to eight months to see a dermatologist. Whatley points out that waiting lists are the norm rather than the exception. Health-care professionals and hospital managers have come to accept this as essential triaging. Whatley says Canada is actually rationing care by cutting corners on technology, hospital beds, and staff.

Grand narratives, says Dr. Whatley, always need a defining myth, a story to capture the essence of a broader vision.

In Canada’s case it was the incredible tale of the late Saskatchewan premier Tommy Douglas’s childhood leg infection. According to Whatley, the story had everything: “conflict suffering, victims, and villains.”

At the age of 6, young Tommy fell and scraped his knee in Falkirk, Scotland. The wound became infected and invaded the bone. After multiple surgeries the boy narrowly avoided amputation. He finally recovered with the help of a famous Winnipeg surgeon who offered to operate for free. The doctor asked only that his medical students be permitted to watch and learn from the operation.

Douglas grew up to become leader of the Canadian Commonwealth Federation. In 1944, he formed the first socialist government in North America. Soon after his election, he invited a Johns Hopkins professor, Henry E. Sigerist, to survey health-care needs in Saskatchewan. Sigerist was a recognized expert on the health system in the Soviet Union.

Douglas declined to let his childhood medical crisis go to waste. He prompted parents to imagine themselves without sufficient funds to pay for a child’s operation. He used his boyhood trauma and leveraged the charitable care he received to fuel his campaign for socialized medicine.

Packaged as an appeal to compassion and the utopian belief that health services “ought not to have a price tag,” Douglas indicted the medical profession as “so cruel and corrupt we should marvel that it could have existed in a democratic society.”

Overlapping accusations implied that only the rich could afford good care. No one thought to question him, said Whatley. But the truth was entirely different. “For three thousand years,” he wrote, “medicine has survived by treating people first and accepting payment later.”

During interviews with several doctors who had practiced in the 1950s and ’60s,  Whatley asked: Did patients who could not pay go without care in the days before Medicare? Every physician he spoke with confirmed “with passion and dignified outrage” that all patients got great care regardless of their ability to pay—in the same way that Tommy Douglas himself did.

Many lower-income working-class families, including my own, who lived through the period prior to socialized medicine also recall family doctors who routinely visited our homes.

In the second chapter of his 1958 book “The Affluent Society,” the late economist John Kenneth Galbraith argued that long-established opinions present obstacles to fresh thought and human progress.

For the clever Canadian-born Harvard professor, our capacity to satisfy authentic human needs and protect vital public interests was being obstructed by a “conventional wisdom” which falsely celebrated the material productivity and superfluous “affluence” of American capitalism.

From the ’60s onward, Galbraith’s mood captured the imagination of progressive North American policy-makers. It became widely argued that the realities of our age called for mixed economies and more government services.

But by the time Galbraith wrote “The Affluent Society,” his philosophical adversaries were mostly imaginary. Since FDR’s New Deal, the managerial imperative to regulate free markets had become central to the thought of academics and politicians throughout the West. For Western progressives, audience approval always trumped the search for truth; and intellectuals like Galbraith were master performers.

Too often, Whatley contends, cynical forms of anti-Americanism and anti-capitalism are invoked to shut down critics of Canadian Medicare. For progressives, the idea of free health care has become the ultimate Canadian value. It’s a defining myth that endeavours to satisfy the collectivist spirit of the nation.

But medical care does not flourish in a political science laboratory, he says. Patients must be permitted to re-establish a connection with their doctors that transcends episodes of government-supplied service. Interacting with interchangeable state-mandated providers will never support excellent care.

Whatley’s examination of Medicare takes thoughtful readers on a road less travelled. He argues that the heavy hand of ideology is preventing Canadians from questioning a deeply flawed status-quo. “We are,” he writes, “stuck in a worldview that invites panic and outrage if anyone questions it.”

Challenging conventional wisdom requires commitment, courage, imagination, knowledge, and dedication to the truth. Whatley offers all of the above in “Politics Before Patients.”