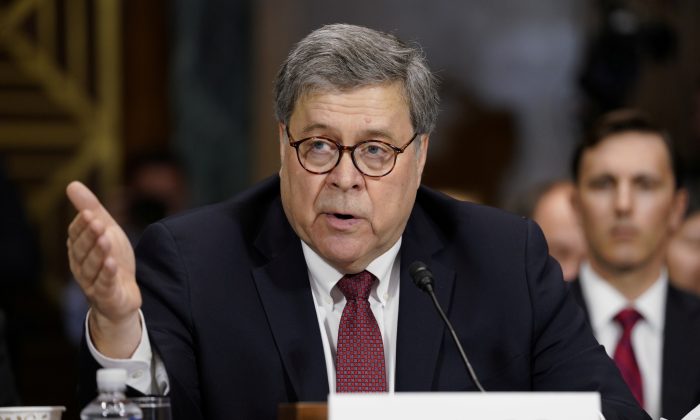 Attorney General William Barr testifies before a Senate Judiciary Committee hearing on "the Justice Department's investigation of Russian interference with the 2016 presidential election" on Capitol Hill in Washington, on May 1, 2019. (Aaron Bernstein/Reuters)
Trump Administration

In a little-noticed exchange during his Senate hearing Wednesday, Attorney General William Barr made a surprising disclosure that could allow the public and press to obtain sensitive details about the origins of the Trump-Russia probe.

During a back-and-forth with Democratic Illinois Sen. Dick Durbin, Barr identified Alexander Downer, a former Australian diplomat, as the FBI’s source for the information that sparked the bureau’s counterintelligence investigation into George Papadopoulos and other Trump campaign associates.

The federal government had not officially identified Downer as the source until Wednesday. His role in the investigation was publicly known, but only through press reports and his own statements to the media.

Federal agencies could deny requests for information about Downer and his role in the opening of “Crossfire Hurricane,” the FBI’s name for the counterintelligence investigation, without official confirmation from U.S. government officials.

That all changed on Wednesday, according to Bradley Moss, the deputy executive director of the James Madison Project, a transparency group that handles national security-related lawsuits.

“That disclosure by the Attorney General would certainly assist any FOIA litigant seeking additional details about the origins of the Russia investigation, as it appears to be the first time the U.S. Government has officially acknowledged the accuracy of prior media reporting that Downer was the source of information,” Moss told The Daily Caller News Foundation.

The James Madison Project successfully sued the Justice Department for the release of FBI applications for Foreign Intelligence Surveillance Act (FISA) warrants against former Trump campaign adviser Carter Page. One argument put forth in the litigation was that the existence of the Carter Page FISA applications had been officially confirmed by members of Congress as well as President Donald Trump.

The Justice Department released redacted versions of the FISA applications on July 20, 2018.

Downer’s role in the Russia probe has been referenced in several major Russia probe documents, though he hadn’t been identified by name until Barr’s comments.

The special counsel’s report refers to a “representative of a foreign government” who is mostly likely Downer. Memos released by California Reps. Devin Nunes and Adam Schiff last year laid out details of the origins of the Russia probe in publicly released memos, but references to sources are redacted from the documents.

It is not clear whether Barr intended to identify Downer as the FBI’s source for the Papadopoulos tip. The revelation came after Durbin asked Barr whether he agreed with the premise of the FBI’s investigation.

On July 26, 2016, the Australian government passed the FBI a memo that Downer had written on May 11, 2016, following a meeting he had in London with Papadopoulos. Downer claimed that Papadopoulos made a reference to Russians possibly releasing information about former Secretary of State Hillary Clinton. The Aussies sat on the memo until after WikiLeaks began releasing DNC emails.

Barr suggested in his testimony that he has concerns with the FBI’s rationale for opening the investigation based on the Aussie tip.

“I would have to see exactly what the report was from Downer, the Australian Downer, and exactly what he quoted Papadopoulos as saying,” Barr told Durbin.

“But from what you just read, I’m not sure what the correlation was between the Russians having dirt and jumping to the conclusion that that suggested foreknowledge of the hacking.”

The Daily Caller News Foundation filed a FOIA request for the FBI’s records on Downer on Thursday.