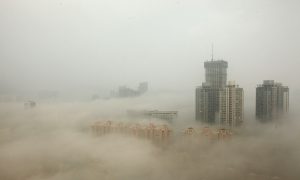 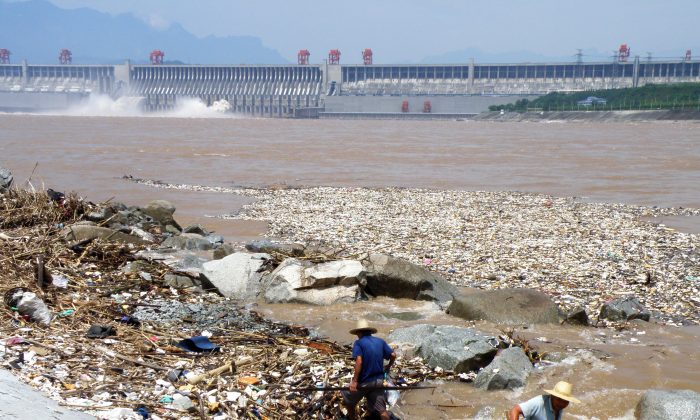 Two workers clean up trash along the bank of the Yangtze River near the Three Gorges Dam in Yichang, in central China's Hubei Province on Aug. 1, 2010. (STR/AFP/Getty Images)
China

Will Xi Jinping’s Speech Save the Yangtze River?

When the Three Gorges Dam was completed in 2006, it was hailed by the Chinese regime as a great engineering achievement. But critics say that the massive hydraulic project has caused many problems for the Yangtze River and its surrounding areas for over a decade—over 1.5 million residents living near the Yangtze River were forcibly resettled; deteriorating water quality endangered plant and animal life; and construction waste has caused severe environmental pollution.

Taken in this context, a pledge by Xi Jinping, the leader of the Chinese Communist Party, to halt new building projects on the Yangtze River seems a remarkable turnaround.

During a Jan. 5 forum held in the southwestern Chinese province of Chongqing and attended by Party leaders from cities and provinces along the Yangtze, Xi called the river, named “chang jiang” in Chinese, “an important ecological treasure.”

He added: “For now and a longways into the future, the restoring of the Yangtze’s ecological environment must be placed at the forefront. Major protection, not major development” is the goal.

Xue Shikui, a senior environmental scientist at the South Florida Water Management District, told Epoch Times in a telephone interview that a proposal similar to Xi’s was ever raised. “Local authorities would likely heed Xi Jinping’s overall proposal,” he said.

But their environmental protection efforts could take sometime to take effect because they have to negotiate with different local business and political groups who “all want to benefit from the Yangtze River,” according to Liu Shukun, a professor at the China Institute of Water Resources and Hydropower Research in Beijing.

“Yangtze River is basically like Xuanzang,” said Liu, referring to the Buddhist monk in the Chinese classic “Journey to the West,” who throughout the novel is pursued by demons trying to eat his flesh. “The people in the navigation business dump oil and other pollutants in the Yangtze River. The mining industry and road repairing business also dump soils and rocks in the river. The electricity companies want to construct hydropower stations to boost their profits.”

Hydroelectric power plants change the ecological makeup of the Yangtze River, affecting aquatic life. Liu explains: “When shallow flowing waters are pooled into deep ponds, the water temperature and the amount of water flowing downstream changes. As a result, the original fish species aren’t able to survive in this new habitat.”

“The Yangtze River is home to some very rare fish species, such as the Chinese sturgeon and the Chinese sucker fish. And a lot of these fishes are at present endangered.”

For years, the Chinese regime has sought to tackle problems along the Yangtze River caused by the construction and operation of the Three Gorges Dam, the world’s largest power station. The dam’s preliminary proposal was pushed through in the face of opposing expert voices in the 1990s, and its construction was later rubber stamped by the National People’s Congress, the regime’s faux legislature.

After the dam was finished, southwestern Chinese provinces on the upper Yangtze experienced severe droughts, while regions on the lower Yangtze suffered from flash floods. In the face of mounting problems, state mouthpiece People’s Daily even published an editorial which discussed the possible tearing down of the dam.

Professor Liu Shikui didn’t support the construction of the Three Gorges Dam, but doesn’t think that it will be torn down in the next decade, despite Xi Jinping’s recent statement.

“Even taking down a few power stations in a show of good faith could be problematic,” he said.