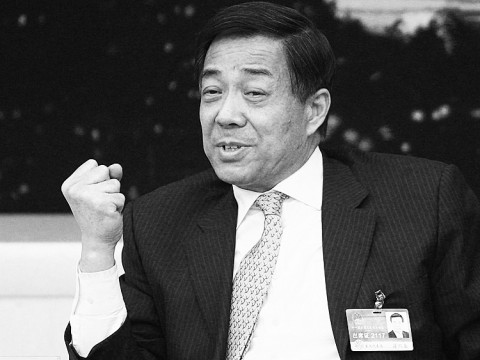 Bo Xilai, Secretary of Chongqing Municipal Committee of the Communist Party of China, in March of 2011. (Feng Li/Getty Images)
Opinion

The ties of Bo Xilai, the Communist Party head of the central-western megapolis Chongqing, and his former right-hand man, Wang Lijun, were sundered after Bo removed Wang as Chongqing’s police chief on Feb. 2.

Four days later, fearing that Bo meant to assassinate him in order to prevent Wang from giving information to a Party investigation into corruption in Chongqing, Wang fled to the U.S. Consulate in Chengdu, four hours drive to the west.

The Chinese regime mouthpiece Xinhua News confirmed on Feb. 9 that Wang spent one day at the U.S. Consulate in Chengdu on Feb. 6, and that related agencies are currently investigating.

The Xinhua statement shows that Wang is already no longer a “comrade,” but his action of going to the consulate has not been treated as a betrayal either. His life seems to be safe, but his political future is definitely gone.

The fate of Bo Xilai is much more complex.

Chinese state-run media said that Bo visited Yunnan Province on Feb. 8-9, and then met with Canadian Prime Minister Harper on the night of Feb. 11.

Rumors have been circulating that Bo went to apologize to the nine members of the Politburo Standing Committee, saying that he shouldn’t have used a person like Wang Lijun; that he denied corruption charges, but is willing to cooperate with an investigation into his and his family’s finances.

Some people have said this affair will be over soon; if the regime drags Wang’s case out for a few years, people will forget about it.

Some mainland scholars have even said that Bo can still make it into the Politburo Standing Committee during the 18th People’s Congress, making it seem like nothing has happened.

This is definitely not possible; there are at least five forces that want to take out Bo Xilai.

First, the men who initiated this incident will not give up. Among them is He Guoqiang in the Politburo Standing Committee and Qiao Shi, the secretary of Central Commission for Discipline Inspection. They have wanted to take revenge against Bo’s father, Bo Yibo, and Jiang Zemin for 15 years. The son of Peng Zhen—a former chairman of the People’s Congress—wants to get even with Bo for the prison sentence given his man Li Zhuang (a lawyer convicted in a kangaroo court proceeding because he attempted to defend a businessman Bo had arrested). They all want to crush Bo Xilai.

Second, the international community will not be silent. Wang Lijun handed over documents to the U.S. Consulate, and human rights organizations are urging the U.S. government to publish what Wang revealed regarding live organ harvesting from Falun Gong adherents, a spiritual group suppressed by the regime. Due to pressure, the U.S. government may seek an answer from the Chinese regime.

Third, because of the spreading of anti-blocking software that can circumvent China’s Internet blockade, many Chinese already know the crimes and lies behind Bo’s Chongqing model—the Chinese regime cannot conceal this any longer. If this already exposed corrupt official were left in his post, even the regime’s higher officials would not stand for it.

Fourth, after things have gotten to this point, Bo himself does not want to be part of the Politburo Standing Committee anymore. Bo Xilai is very power-hungry—just as Wang said—and he is very jealous. He believes he is better than Vice Chairman Xi Jinping, the presumptive next head of the CCP, in every regard, and that he should be the “crown prince.” If he becomes the crown prince, isn’t that better than just being a Politburo Standing Committee member?

The last force against Bo is the combined opposition of CCP head Hu Jintao and Premier Wen Jiabao.

When Bo was banished to southwestern China, he started to use people’s dissatisfaction with the large gap between the rich and the poor, and launched his ultra-leftist movements of “singing praises for the red” and “hitting the black”—singing Maoist, pro-communist songs and leading a so-called anti-Mafia campaign. This was the first time in the CCP’s history that a political movement was launched by a local official, which was obviously done to deprive the central government of authority.

Everyone knows that Bo aspires to be a second Mao Zedong. He has vigorously built up his personality cult in Chongqing over the past three years. He had a big neon sign installed on the top of the building, saying “Secretary Bo, You Work Hard,” an obvious reference to a slogan popular from Mao’s days, “Grandpa Mao, You Work Hard!”

He also arbitrarily changed the name, uniforms, and equipment of Chongqing’s Public Security Force, turning it into something like an independent armed force. When he gave orders to arrest Wang in Chengdu, he mobilized the armed police as if launching a coup.

Continued on the next page: Four Aces