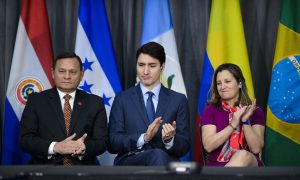 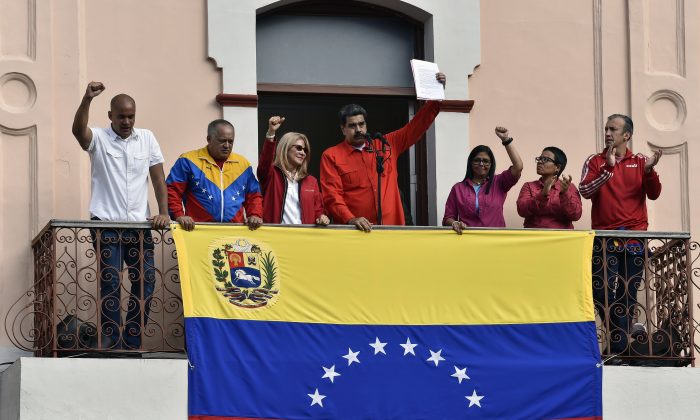 Venezuela's President Nicolas Maduro (C), speaks to a crowd of supporters flanked by his wife Cilia Flores (2-L), Venezuelan Vice-president Delcy Rodriguez (R) the head of Venezuela's Constituent Assembly Diosdado Cabello, along with other members of the government, to announce his is breaking off diplomatic ties with the United States, during a gathering in Caracas on Jan. 23, 2019. (Luis Robayo/AFP/Getty Images)
Viewpoints

The decisions being made by the Trump administration in the coming weeks regarding Venezuela may constitute a sea change in U.S. policy.

If a more vigorous application of the Monroe Doctrine is in the Trump playbook, it will impact the political landscape in both Venezuela and America, as well as the entire Latin American region, the Middle East, and indeed, the rest of the world.

Actually, this may be understating the case.

At first glance, Venezuela appears to be just another Latin American socialist basket case. But there’s more than meets the eye in this sad and unnecessary drama. Sure, it resembles the Cuban communist nightmare, with perhaps less organization and more desperation. It also bears a likeness to Nicaragua in the 1980s—almost irretrievably divided, corrupt, and weak democratic institutions in the clutches of militant Marxists.

The Venezuelan tragedy is all of that, of course, but there are complex geopolitical and strategic factors to consider as well. For example, the country’s heartbreaking descent into the lower echelons of chaos could trigger more of the same in the region. Or, the scale of the migrant caravans heading northward toward the United States could potentially increase radically. Either or both could happen. Either could become a destabilizing force in the greater Latin America region and present a major geopolitical and economic headache for the United States.

From a geopolitical as well as a national perspective, Venezuela is a mess. It’s had economic, military and clandestine relationships with Iran, the world’s largest terrorist state, for years. That complicates things. It has also certainly violated U.S.-imposed trade sanctions against Iran, especially since President Donald Trump re-imposed them on Iran’s banking and energy sectors. That in itself poses a challenge to American credibility in the world.

That said, with the recent arrival of an Iranian naval battle group off Venezuela’s coast, including surface-to-surface missiles, anti-aircraft guns, and electronic warfare capabilities—it’s clear that the situation is no longer just about Maduro’s socialist experiment. If Iran can bait the United States into involving itself in a Latin American war, the Iranians may think they may have a freer hand in the Middle East to pursue a nuclear missile agenda, testing rockets and attacking Israel.

Of course, Russia (whose navy is also in the area) and China are also watching to see how the United States responds. Both have military ties to, and investments in, a leftist Venezuela. At the same time, both are on the pointy end of U.S. foreign and trade policies.

Russia hates U.S. influence in the Middle East, Eastern Europe, and Ukraine. And of course, China would prefer that the United States withdraw from the Asian-Pacific region and leave Taiwan to them. Both would also like to see an end to the U.S. dollar as the currency for international trade and finance. No doubt that Iran, Russia, and China would all like to see the United States entangled in a new quagmire in its own backyard.

But with the United States recognizing opposition leader Juan Guaido as “interim president,” it’s increasingly evident that the Trump administration is laying the groundwork for some kind of U.S. response to the deteriorating situation there. And that response, whatever it may be, looks as if it will be happening sooner than later. There are several reasons why this appears to be the case.

For one, Maduro has blocked much needed humanitarian aid from the United States that Guaido has approved. It’s shortsighted thinking on Maduro’s part. It really only adds to Guaido’s credibility and the United States’ potential influence in a future Guaido government.

That will likely resonate with a large part of the Venezuelan people. Not only is Guaido a leader in the Venezuelan National Assembly, but he’s representing his country in high-level talks with the most powerful country in the world. That’s credibility.

On the flip side, Maduro comes out the loser. His denial of aid to his hungry people only reinforces the reality of him as an incompetent, despotic leader of a failed state. In a time of want and deprivation, that’s an increasingly a hard sell, as is his validity as the rightful leader of Venezuela.

There’s little wonder why. As the once-major oil producer and member of OPEC, Venezuela’s rapid fall in oil production has added fuel to the country’s economic meltdown under Maduro’s direction. Apologists say that the avowed socialist easily won re-election in May of 2018 with 5.8 million votes compared to 1.8 million votes for his closest rival.

But the turnout was less than one-third of voters, and the election results are disputed by many, since the election board is reportedly firmly in the Maduro camp.

What will the Trump administration do? What does it want to do? Will Trump be forced to declare another national emergency to carry out foreign policy? More to the point, will Nancy Pelosi’s adversarial Congress challenge his authority?

In actuality, Trump has the authority for a short-term intervention. But for extended commitments of U.S. military power, he must get congressional approval. If the current political climate in Congress continues, that’s unlikely to happen.

Congress—at least the House—is in no mood to back a president that the majority are seeking to remove from office. That fact puts an urgency into policy. It will certainly play a role in how Trump shapes his decisions.

Congressional restraint would, therefore, force Trump’s hand toward a very quick and assertive action on the part of U.S. diplomatic, economic, and perhaps even military power. That would seem to play to the United States’ advantage and to Trump’s personality—not just in Venezuela, but throughout Latin America.

As for Trump’s decision-making, it may simply be a matter of refusing to be a prisoner of history. Recalling how much leverage the Soviet Union got out of Cuba—and how much Iran, Russia, and China may yet get out of Maduro—Trump may have already decided to act in a direct way with a predetermined outcome. It wouldn’t be surprising.

Why is so much riding on the once-wealthy jewel of South America that has fallen faster than a socialist talking point from Rep. Alexandria Ocasio-Cortez’s lips? The reason is both complex and simple. The short answer is that Trump’s political will, and America’s place on the international stage, will be determined in Caracas.

Finally, Trump would be wise to see that the Iranian–Venezuelan partnership isn’t comparable to the Soviet Union-Cuba alliance. The Soviet Union, for all its bad deeds, was largely a symmetrical—if adversarial—relationship. It was a nuclear-armed rational actor. Mutually assured destruction meant something to the Soviets.

The Iran–Venezuela axis, on the other hand, is qualitatively different. America’s struggle with the Islamic Republic of Iran is asymmetrical. Iran wants nukes, is trying to get them and will likely use them when it can. Its way of seeing the world is more than ideological, it’s religious. Therefore, it’s also somewhat unpredictable and is much more prone to take risks that may escalate tensions and even lead to some bizarre realization of Islamic eschatology. That makes it a much more dangerous adversary.

What will Trump do? We’ll have to wait and watch. And with “all options on the table,” the whole world, in fact, is watching too.
James Gorrie is a writer based in Texas. He is the author of “The China Crisis.”