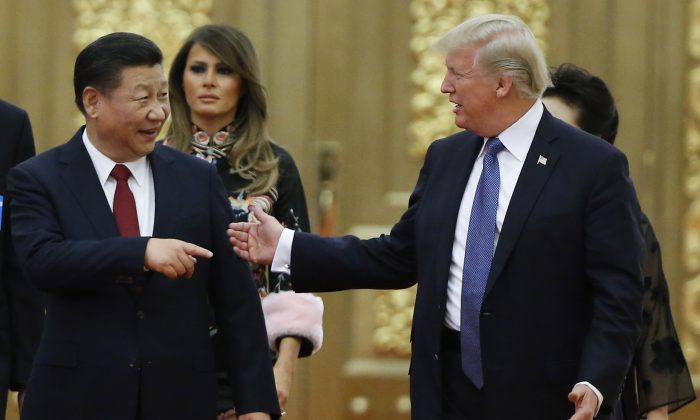 Those who think that Trump lacks a strategic perspective or that the 21st century belongs to China may want to think again. There may be more to Trump’s policies than preserving U.S. manufacturing jobs. Much more.

For one, Trump’s trade negotiations are putting the lie to the inevitability of China’s supremacy and revealing its true economic fragility. And that fragility is just beginning to be seen. China’s vaunted GDP is falling, and some estimates put it not at the usual expected 6 to 7 percent, but at around 4 percent. But given the falsity built into the Chinese Communist Party’s (CCP) accounting, even 4 percent may be overstating the facts.

For another, if Trump has his way, U.S. tariffs won’t be the only trade hurdle facing China.

Nonetheless, Chinese leader Xi Jinping’s reaction to Trump’s tariffs is telling. Rather than think about how to make Chinese products more competitive, Xi’s primary concern, as he recently told Party leaders, is to maintain “control” over China. In a sad way, that’s understandable; Xi finds himself in a most difficult and tenuous position.

On one hand, if he were to unleash the true power of his people by increasing the free flow of information, ideas, and economic activity, the Chinese economy would certainly grow rapidly and much more efficiently. But, that would require relinquishing Party control over the economy, which would then diminish its power and legitimacy.

Such an outcome would likely even render both the Party and Xi’s position of emperor (that’s really what he is) irrelevant—even reactionary. The CCP would find it difficult or impossible to control those forces (see Tiananmen Square, 1989).

Indeed, maintaining control has been a major concern of the CCP for years. Internal security spending has outpaced China’s entire external defense budgets since at least 2011 and continues to rise. The consequences of internal instability to the CCP are—to put it in Trumpian terms—HUGE.

On the other hand, Xi’s decision to double-down on increasing Party control of the economy by turning more successful private firms into state-owned enterprises (simultaneously ensuring loyalty among Party beneficiaries and transferring power away from the commercial class), as well as injecting more stimulus for wasteful infrastructure projects, has the familiar stench of past failures.

The CCP’s theft of successful firms has destroyed trillions of dollars of economic value, as Party members transfer the profits out of the country into Western banks and real estate. And hundreds of unwanted ghost cities and bridges-to-nowhere have had little if any long-term economic impact. Neither is a solution, but may prompt pushback from the people, triggering the instability Xi so rightfully fears.

The larger reality is that Xi’s reaction to Trump’s policies reveals his acknowledgment of an even bigger challenge from the United States. He knows—and fears—that Trump’s policies aren’t simply temporary tariffs against Chinese goods, but potentially the beginning of a deeper-seated, long-term U.S. policy shift.

Trump’s strategy may include not only a broader U.S. disengagement from China, which would deny the U.S. market to Chinese exports, but a long-term strategic plan to isolate China from all major Western markets.

Of course, in the wake of U.S. tariffs, China is looking to maintain, and if possible, increase trade with the European Union. But that may be more problematic than it seems. That’s because the conditions in recent U.S. trade deals that Trump has made with Canada and Mexico are that trading with a “non-market economy” (which Trump defines China to be) will be a deal-breaker. Trump is seeking the same conditions in U.S. trade negotiations with the UK, the EU, and Japan.

Unlike China’s phony GDP statistics, it’s no exaggeration to say that Trump is attempting to fundamentally restructure the economic—and therefore strategic—alignment of the world by forcing the major Western economies to choose between trading with China or the United States.

The strategy makes sense on a variety of levels.

Why should developed nations allow their technology, IP, manufacturing base, and employment to be usurped by a nation that gains advantages through theft, deception, lawlessness, persecution, and slave labor? Why should they do so while largely being denied access to the enormous Chinese market?

The effects of China’s mercantilist practices have long been felt by Western trading partners in the form of lost market share, declining manufacturing capacity, high unemployment, and loss of influence in the world. How is that open or fair trade?

Also, why should these same nations—especially the United States and Japan—be simultaneously militarily threatened by China?

And going forward, which of these countries—not to mention those nations in China’s neighborhood and those subjected to China’s neo-colonial tendencies in Africa and South America—would like to see a world economically and militarily dominated by an aggressive China?

That may be what’s driving Trump’s trade war with China.

It wasn’t too long ago—2000, in fact—that the United States, UK, Europe, and Japan managed to do quite well through mutual trade agreements without China for decades. Trump’s point is that they can do so again and would be better off, and he realizes that China isn’t the only country that can play the “market-access-denied” game.

Trump may also be figuring that more economic pressure will turn China’s very real internal security concerns into a full-blown crisis. After all, without economic performance, the CCP loses legitimacy, and all 1.6 billion Chinese know it. U.S. policy makers may be betting that Xi and the CCP are unprepared for the scope, speed, and depth of Trump’s challenge.

If U.S. negotiations with the UK, the EU, and Japan are successful and China’s trade with the West is significantly reduced, the short-term consequences of such a strategic shift in trade would be disastrous for the Chinese economy, not to mention the prestige and legitimacy of Xi and the CCP. Xi would have to deal with losing market access to much of the West (Japan included). Internal stability would potentially turn into full-blown rebellion in some areas, forcing Xi to focus on controlling his restless population. China’s economy and the CCP may collapse under its own weight of corruption, debt, and inefficiency.

The long-term outcome of Trump’s policies may well be intended to bring about just such a result. Isolated and left to its own devices, the CCP would have plenty on its hands keeping its people in line. In fact, Trump’s ultimate policy goal may be to trigger the collapse of the CCP and perhaps even a breakup of China from its current form.

Perhaps Trump is figuring that he can turn the tables and “meddle” in China’s internal affairs. Perhaps his long game is to provide the catalyst for the emergence of a capitalist, pro-Western revolution in China—one that has shed the shackles of a corrupt and inhumane political system for a peaceful one that no longer threatens to destroy the economies of its trading partners and the international order.

How’s that for “The Art of the Deal?”