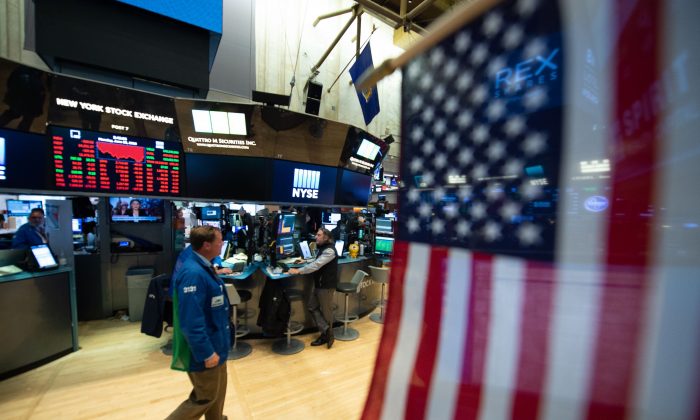 Traders work on the floor at the closing bell of the Dow Industrial Average at the New York Stock Exchange in New York, U.S. on June 25, 2018. (Bryan R. Smith/AFP/Getty Images)
Thinking About China

Will Trump Kick China out of Financial Markets?

How far will the US president go in trade war with China?

As the U.S.–China trade war intensifies, the chances of a trade agreement between the two countries continue to diminish. At this highly acrimonious stage, a deal may not even be possible, and would seem to leave us with an escalating trade war through the 2020 election.

In addition to applying high tariffs on every product that China exports to the United States, President Donald Trump has banned Huawei and its subsidiaries from doing business with U.S. firms and telecom carriers because of suspected large scale data theft capabilities built into the equipment.

While carrying out that ban has proved much more difficult than issuing it, the United States also is encouraging its allies in Europe, Asia, and Oceania to also bar the Chinese telecom equipment and network provider.

The effort has gained traction—Huawei has lost more than a billion dollars in business in 2019 alone. More bans on Chinese tech companies will likely follow. What more can or will Washington do to punish Beijing for its economic warfare against the United States?

Quite a lot, actually.

Denying China access to U.S. capital markets is now under serious consideration at the highest levels of the federal government. The rationale for doing so is clear and compelling. China has been abusing the system for decades by faking the financial health of listed companies, to the detriment of investors and the capital markets.

Reverse-takeovers aren’t illegal nor are they necessarily bad. But China took advantage of that process to bestow unknown Chinese companies with instant credibility. What’s more, many attracted investors with virtually no oversight as to the viability of their operations or the veracity of their accounting.

The level of China’s fraud is staggering. According to documentarian Jed Rothstein in his 2018 film “The China Hustle,” up to $50 billion or more was invested in fraudulent companies listed on the New York, American, and Nasdaq stock exchanges.

How could such a massive amount of corporate fraud occur under the noses of regulators?

Apparently, it’s quite easy to do. Veteran hedge fund manager Jim Chanos affirms that, noting, “If the management wants to commit fraud, the auditors are unlikely to find it.”

But it’s not just U.S. stock markets that China’s abuses. Multiple versions of pump-and-dump schemes have been ongoing in the Shanghai and Hong Kong stock markets for years. The cycle is the same. Valuations are rapidly inflated, which attracts millions of Chinese investors, who then leverage themselves to the hilt to participate in those gains.

For these reasons, U.S. lawmakers such as Sen. Marco Rubio (R-Fla.) are proposing banning $49.5 billion of U.S. pension fund money, known as the iFund, from being invested in Chinese companies. That would send a clear message to China by halting a considerable amount of investment cash from going into mainland companies.

But as momentous as that move would be, it could be followed by even bigger hits to China’s capital needs. Fifty-five percent of all new U.S. listings this year have been Chinese companies. Consider as well the effect of the federal government’s pension fund refusal to invest its $578 billion pension funds in the MSCI All Country World Index. Today, Chinese firms comprise 4 percent of that index. In a few years, that percentage is expected to double. Without access to U.S. capital markets, mainland China firms would be scrambling for the capital they need to survive.

But there are, however, complications to this strategy. For one, Chinese companies are deeply embedded in major indexes that are found in almost every retirement and investment portfolio in the United States. Removing Chinese companies could be costly to investors in the form of falling values and to the health of the capital markets themselves.

Other capital markets are available. The Shanghai and Hong Kong markets are probable alternatives, but given their reputations as well as the current political crisis in Hong Kong, neither compare to the U.S. markets. European and perhaps Japanese markets are an option, but their interest and investment levels remain to be seen.

Such a policy would also have several immediate geopolitical consequences. U.S.–China relations would worsen, and might push the trade war further into the future than expected. That, however, may be the price that needs to be paid.

The argument for barring China from U.S. capital markets is simple but compelling:

Why should the United States government allow U.S. capital markets and the American people to fund the world’s most powerful adversary of freedom in the world and which threatens the very markets it participates in, as well as the entire global financial system?

The answer may be easy to understand, but it will be hard to put into practice.