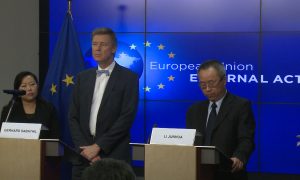 Will This Woman Be Able to Sue the Chinese Police?

When a Chinese woman tried to visit the tomb of a famous dissident this April, she was unlawfully seized by state security and locked in a hotel basement for nine days. Released on the tenth day, she is now putting together a lawsuit to take on the regime’s formidable internal security apparatus.

On April 2, Huang Lihong travelled to the city of Shaoyang, Hunan Province, to visit the grave of Li Wangyang, a dissident known for his role in the Tiananmen Square protests in 1989. Huang was arrested along with another 13 people, according to China Human Rights Defenders, a non-governmental organization.

Huang submitted a complaint to the court to sue state security on April 23 for their illegal use of detention. It is the first time in mainland China that anyone has publicly challenged the security forces through legal action.

April 5 is the date of this year’s Qingming Festival, also known as “tomb-sweeping day;” it is a time for Chinese to honor the deceased. Huang Lihong and the others had visited the tomb of Li Wangyang, who was given a 22-year prison sentenced for demanding the vindication of the Tiananmen Square Protests.

Soon after his 2011 release, however, Li was hospitalized and kept under surveillance in Shaoyang. In June 2012, authorities claimed that Li had committed suicide. Following public suspicion, this was changed to “accidental death.”

Huang told the New York-based New Tang Dynasty Television that she had been detained before, for two months, also in connection with Li Wangyang.

“In 2012, when they claimed Li Wangyang committed suicide, I was detained for 50 days,” Huang said. “The state security knew that I’d keep demanding that the truth of his death be investigated, and that I would keep visiting his tomb. They wanted to stop me. At the time, nearly everyone in Shaoyang who was concerned about the Li incident got trouble.”

“I really have no freedom. There is no holiday that I can enjoy,” Huang said, “It’s unacceptable for them to restrain my freedom on a whim.”