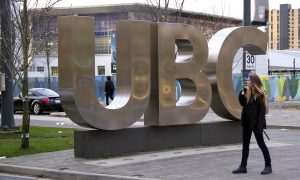 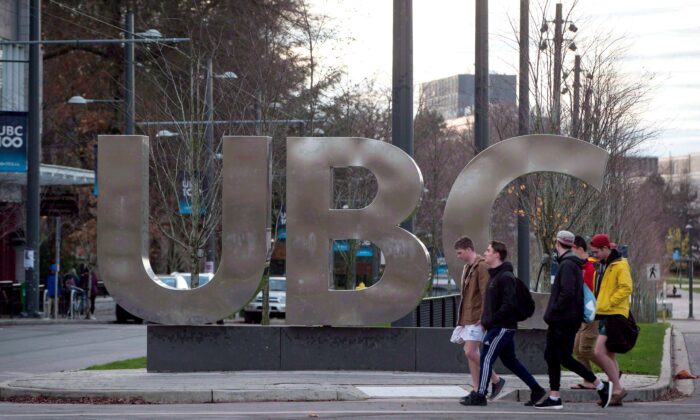 Students walk past the UBC sign at the University of British Columbia in Vancouver in a file photo. (The Canadian Press/Darryl Dyck)
Viewpoints

University Recruitment Should Be Based on Merit

Up until now, the University of British Columbia has been a first-rate research and teaching university, not only by Canadian standards but by international standards. Now, UBC’s president, Dr. Santa Ono, says he plans to establish new priorities for the university.

In a recent policy statement, Dr. Ono promised that he would begin an extensive overhaul of UBC to “Indigenize” the institution. In fact, he said that UBC will become a world leader in rejecting the university’s colonial past and adopting the indigenized present.

UBC is one of the largest universities in the country with more than 66,000 students and annual research expenditures of over $650 million. The university employs some of Canada’s best researchers and teachers, and it has some of the best professional and graduate programs in the country. UBC has both “prestige and status,” qualities that can be destroyed with one or two bad decisions.

No one—not faculty members, students, or citizens—would object to enrolling more capable and motivated indigenous students and including more indigenous culture and history in relevant courses and programs. No fair-minded student, for example, would object to learning more about the art and culture of B.C.’s indigenous people.

Equally obvious, universities should recruit the most talented students they can find, and they should particularly recruit talented and motivated students from disadvantaged backgrounds. The country needs more well-educated and thoughtful citizens.

This policy goes against the merit principle that has been the guiding ethos of UBC (and all other world-class universities). Students, professors, and administrators should be selected because they are the very best, not because they fill a racial, ethnic, or gender quota.

When it comes to indigenizing the science, technology, engineering, and mathematics (STEM) courses, as part of Dr. Ono’s strategic plan, the pendulum may have swung too far already. Even now, critics are saying that they cannot understand integrating indigenous knowledge into mathematics, physics, or many other science courses.

Of course, some professors support Dr. Ono’s indigenization strategy. A number of professors would probably like to begin each of their class lectures with an acknowledgement that the campus is situated on the unceded land of the Musqueam and other indigenous bands.

But Dr. Ono may soon begin to question his plan. He has, of course, read about some extremists in the indigenous community across the country, the blocking of pipelines in northern B.C., the dispute over fishing rights and quotas in Nova Scotia, and the blockage of several housing developments in southern Ontario.

In considering these and other explosive situations, the UBC president needs to engage in some sober second thought about his indigenization plan. He must know that his presidency would not survive a major dust-up with indigenous people.

Above all, Dr. Ono knows that he can’t get caught in a web of political correctness. Smart administrators always have an escape plan that they can use when an administrative idea turns into a crisis.

So far, indigenous leaders have applauded Dr. Ono’s reset plan. But if he does not deliver substantial changes year after year, he will lose their support. If that happens, these leaders will remind him of his commitment to go further than anyone else: “There is no one, anywhere in the world, that has yet done this in a university setting…”

Dr. Ono also knows that it only takes a few radicals to get many students and faculty members out to protest a promise that has not been honoured. Surely, not honouring this promise will be spun as “dishonouring indigenous people.”

Dr. Ono has promised a lot, and soon he will need to deliver on his promise. UBC faculty members, students, and administrators, as well as faculty members at other Canadian universities, are waiting patiently to see how the UBC indigenization plan works out. If Dr. Ono succeeds, then other universities are likely to follow.

Rodney A. Clifton (rodney.clifton@umanitoba.ca) is a Senior Fellow at the Frontier Centre for Public Policy and a Professor Emeritus at the University of Manitoba.