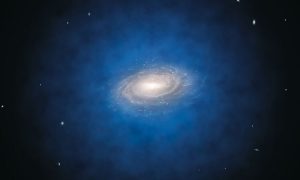 Will the Search for Dark Matter End With This Galaxy?

A newly discovered dwarf galaxy orbiting the Milky Way appears to be radiating gamma rays—a sign that dark matter may be lurking at the galaxy’s center.

“Something in the direction of this dwarf galaxy is emitting gamma rays,” said Alex Geringer-Sameth, a postdoctoral research associate in the physics department at Carnegie Mellon University and lead author of the paper that has been submitted to Physical Review Letters.

“There’s no conventional reason this galaxy should be giving off gamma rays, so it’s potentially a signal for dark matter.”

The galaxy, named Reticulum 2, was identified recently in the data of the Dark Energy Survey, an experiment that maps the southern sky to understand the accelerated expansion of the universe. At approximately 98,000 light-years from Earth, Reticulum 2 is one of the nearest dwarf galaxies yet detected.

A Wormhole Close to Home and 2 Other Astonishing Space Holes

Using publicly available data from NASA’s Fermi Gamma-ray Space Telescope, researchers have shown gamma rays coming from the direction of the galaxy in excess of what would be expected from normal background.

“In the search for dark matter, gamma rays from a dwarf galaxy have long been considered a very strong signature,” said Savvas Koushiappas, assistant professor of physics at Brown University. “It seems like we may now be detecting such a thing for the first time.”

The researchers caution that while these preliminary results are exciting, there is more work to be done to confirm a dark-matter origin.

What is Dark Matter?

No one knows exactly what dark matter is, but it is thought to account for around 80 percent of the matter in the universe. Scientists know that dark matter exists because it exerts gravitational effects on visible matter, which explains the observed rotation of galaxies and galaxy clusters as well as fluctuations in the cosmic microwave background.

No one knows exactly what dark matter is, but it is thought to account for around 80 percent of the matter in the universe.

A leading theory suggests that dark matter particles are WIMPs—Weakly Interacting Massive Particles. When pairs of WIMPs meet, they annihilate one another, giving off high-energy gamma rays.

If that’s true, then there should be a lot of gamma rays emanating from places where WIMPs are thought to be plentiful, like the dense centers of galaxies. The trouble is, the high-energy rays also originate from many other sources, including black holes and pulsars, which makes it difficult to untangle a dark matter signal from the background noise.

That’s why dwarf galaxies are important in the hunt for the dark matter particle. Dwarfs are thought to lack other gamma-ray-producing sources, so a gamma ray flux from a dwarf galaxy would make a very strong case for dark matter.

We may have a non-gravitational detection that shows dark matter behaving like a particle, which is a holy grail of sorts.

Scientists have been looking at them for signs of gamma rays for the last several years using NASA’s Fermi Gamma-ray Space Telescope. But there’s never been a convincing signal—until now.

Over the last few years, the researchers have been developing an analysis technique that searches for weak signals in the gamma ray data that could be due to dark matter annihilation. With the discovery of Reticulum 2, Geringer-Sameth turned his attention to that part of the sky. He looked at all of the gamma rays coming from the direction of the dwarf galaxy as well as gamma rays coming from adjacent areas of the sky to provide a background level.

“There did seem to be an excess of gamma rays, above what you would expect from normal background processes, coming from the direction of this galaxy,” he said. “Given the way that we think we understand how gamma rays are generated in this region of the sky, it doesn’t seem that those processes can explain this signal.”

Further study of this dwarf galaxy’s attributes could reveal hidden sources that may be emitting gamma rays, but the researchers are cautiously optimistic, Walker said.

“The fact that there are gamma rays and also a clump of dark matter in the same direction makes it quite interesting.”