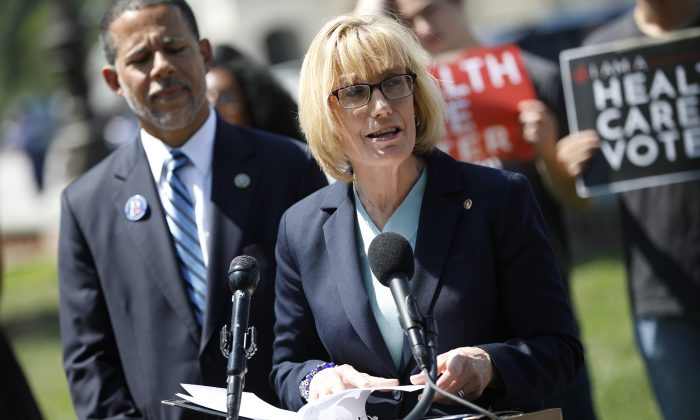 Sen. Maggie Hassan (D-N.H.) takes questions from reporters outside the U.S. Capitol on June 26, 2018, in Washington, D.C. about the Affordable Care Act. (Photo by Aaron P. Bernstein/Getty Images)
US

Will the Leak Change Anything in November’s Midterm Elections?

Political observers are divided about whether The Leak earlier this week of a Supreme Court opinion draft that would overturn Roe v. Wade will have an effect on the outcome of the 2022 midterm elections in November, with Republicans generally doubting anything will change and most Democrats hoping for the opposite.

Republicans are mostly skeptical because they doubt pro-abortion voters will be any more fervent in supporting Democrats come November than they would have been without The Leak.

Democrats, however, see newly roused pro-abortion voters as giving them a huge edge in close races, especially in the Senate, with The Leak serving as the perfect spark to turn them out in greater numbers.

Whoever proves to be correct, what’s certain is that prior to this week, abortion was barely a blip on the 2022 midterm election radar, as noted by Punchbowl News, the liberal Democrat-leaning political insiders newsletter:

“Before Monday evening, when Politico scooped that the landmark 1973 Roe v. Wade ruling was on the verge of being overturned by the conservative majority on the Supreme Court, abortion was barely registering as a blip on the political radar.”

What dominated the radar “were the economy, inflation, COVID-19, crime, immigration, and Ukraine, according to numerous polls. Economic concerns—driven by soaring gas, food, and housing prices—were what Americans wanted Congress and President Joe Biden to address, and Democrats were getting clobbered over their failure to do so.”

Punchbowl News pointed to multiple data points that illustrated just how small an issue abortion was prior to The Leak:

One of the Democrats most hopeful that The Leak will have a huge effect in terms of turning out pro-abortion voters is Sen. Maggie Hassan of New Hampshire, who is seeking a second term after winning the closest Senate contest in 2016, when she defeated incumbent Republican Sen. Kelly Ayotte.

Although a certified liberal, Hassan has recently been tacking to the right, especially on immigration, becoming the first Senate Democrat to back completing the Trump wall on the U.S. border with Mexico.

But Hassan leaped on the abortion issue within hours of The Leak, telling a May 3 conference of EMILY’s List backers that November will be the “most important election of our lifetimes. On the ballot will be a woman’s fundamental right to be a full and equal citizen in our democracy. This is a fight not just to defend reproductive health care—but a woman’s right to control her own destiny. And it’s a fight we must win.”

This paragraph from Hassan’s text is likely a template for Democratic candidates across the country hoping to boost turnout by warning pro-abortion voters of the alleged frightening consequences if they fail to turn out and defeat the “Republican men” opposing her:

“If elected to the Senate, they would ban abortion with no exceptions for rape or incest. They would defund Planned Parenthood. They would vote for justices who will take away the constitutional rights of American women. And anti-abortion activists are already plotting a push for a national ban on abortion—and my opponents would be right there with them. That is their agenda. But I have taken on anti-choice opponents before and won—and together we will do it again.”

Hassan is expected to have a close race, no matter which of the three Republicans currently seeking the GOP nomination is her general election opponent, so if The Leak sparks even a minimal increase in pro-abortion voters in her race, it could be the winning difference.

But it might also be the losing difference in other states.

In North Carolina, for example, which has one of the most-watched Senate races in the country to replace the retiring incumbent Republican, Richard Burr, and multiple House races in districts drawn to GOP advantage, the state party’s chairman has no doubt The Leak will have an effect on voters across the board.

“This is an important issue, I don’t mean to downplay it, but I’m just not sure if it breaks through into the top tier of issue sets that are going to drive people to the polls in November, ” he said.

Whatley said he thinks it most likely The Leak would have an impact in close races such as the New Hampshire Senate contest, because “you obviously try to use any issue set you can to turn out voters and to have conversations with undecideds.”

Regardless of the impact on the election or how the Supreme Court ultimately rules on the abortion issue, Whatley expects “coming out of this Court case a massive national conversation, pro-life versus pro-choice, however you want to frame it, because if this decision is what we think it’s going to be, those debates are going to devolve around to the states.”

Democrats aren’t alone in seeing a politically beneficial effect from The Leak.

“It’s going to mobilize people certainly on both sides, but this is what the pro-life movement has been waiting for,” Susan B. Anthony List Vice President Mallory Carroll told The Hill. “It’s basically proof of purchase, return on investment for our pro-life political engagement.”

As a result, Carroll believes, The Leak will “keep this issue top of mind for Americans for the duration of the summer and leading into November.”