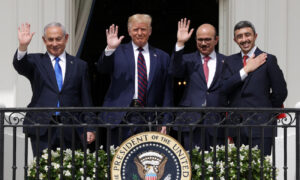 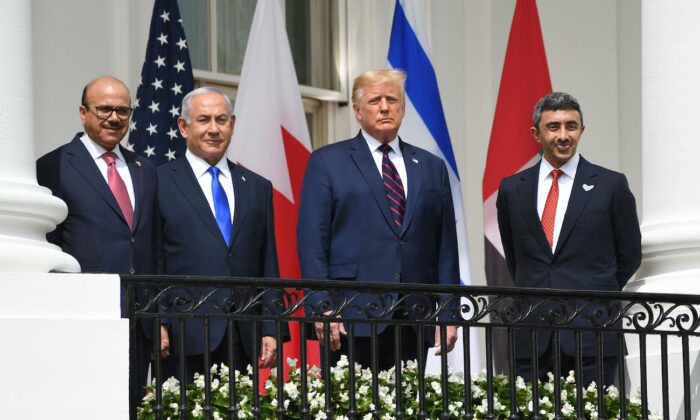 (L-R) Bahrain Foreign Minister Abdullatif al-Zayani, Israeli Prime Minister Benjamin Netanyahu, President Donald Trump, and UAE Foreign Minister Abdullah bin Zayed Al-Nahyan pose from from the Truman Balcony at the White House before they participate in the signing of the Abraham Accords where the countries of Bahrain and the United Arab Emirates recognize Israel, in Washington, Sept. 15, 2020. (Saul Loeb/AFP via Getty Images)
Viewpoints

Will the Biden Administration Undermine the Abraham Accords?

Based on words and deeds, the emergent Iran policy of President Joe Biden’s administration is either structurally incoherent, another blatant example of mixed messaging by intellectual mediocrities or, worse yet, both.

Whether alone or both, the structurally incoherent condition is dangerous. Whatever the case, the administration must quickly decide if it wants to advance sensible policies that will secure Middle East peace or, in lieu of that obvious wisdom, choose to promote murderous geopolitical fantasy theories hawked by left-wing academia and authoritarian leftist media.

The Iranian dictatorship ritually threatens Death to America and Death to Israel. Its agents conduct or finance violent meddling operations in at least 30 different countries.

Another hard fact: The Joint Comprehensive Plan of Action (JCPOA), the ostentatious cover name that former President Barack Obama’s administration pasted on its Iran nuclear deal, never halted Iran’s nuclear weapons development program. Israeli intelligence has leaked enough info to support this statement. The JCPOA did give the dictatorship billions of dollars, which it used to finance terror attacks and proxy wars.

On Jan. 5, then-Secretary of State Mike Pompeo told Bloomberg News that terminating the JCPOA set the stage for the Abraham Accords, saying: “The policy we took with respect to Iran—putting pressure on Iran, not taking Iran as our primary security partner in the Middle East, but, in fact, flipping the script and acknowledging that the Gulf states had the rightful capacity and Israel had the rightful capacity to defend themselves from Iran, and putting real pressure on Iran. Those things all enabled the good work.”

In late January, during a United States Institute of Peace-sponsored panel discussion, former Trump national security adviser Robert O’Brien echoed Pompeo. The Trump administration “built political capital with Bahrain, with Morocco with the UAE by letting them know that we would stand with them, by getting out of” the Iran nuclear deal, “which was a serious threat to the region.”

Biden administration national security adviser Jake Sullivan participated in the panel. He told the audience the Biden administration intends “to build a global effort, including partners and allies in the region and in Europe and elsewhere, to take on the other significant threats Iran poses.”

However, Sullivan also said he wants to “get back to diplomacy” and “put Iran’s nuclear program in a box.”

The Abraham Accords are unfinished business—a complex work in progress that has achieved much but requires resolve to succeed. Its spine is isolating Iran’s dictatorship and spurning security deals, especially nuclear weapons deals, with a corrupt and criminal regime that cannot be trusted.

Oh, but. The Biden administration and its faculty-club leftists can’t admit Obama’s Iran deal was an amalgam of self-infatuated fantasy and idiocy.

What should the Biden administration do about Iran?

Oh, but! The Bidenists can’t do that because OrangeManBad! Plus, the Abraham Accords exposed Obama’s Iran policy as blind and vapid.

The Abraham Accords, however, are too valuable to lose.

In 2017, the Trump administration reimposed economic sanctions with the goals of stopping Iran’s nuclear weapons program and penalizing the regime’s malign behavior. Trump held the regime responsible for its proxy’s violent actions.